Today is my little brother's birthday.  Luke is turning twelve, which I can't quite get my head around.  I still see him as a little boy, but he's about to start middle school.  It's crazy. 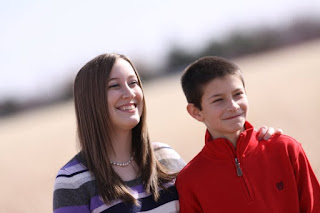 I have so many funny stories from my little brother's life.  Like the time when he saw a jackrabbit on the side of the road and screamed, "Awww, look!  A baby kangaroo!"  Or the time when we heard him singing "Blessed Be the Name," except he was singing "Recipe the Name" instead.  (And of course there was the time when he legitimately thought "He Calls Me Friend" by Phillips, Craig, and Dean was "He Calls Me Fred," but that's another story.)

In honor of Luke's birthday, I thought I'd share a few cute memories in photograph-form. 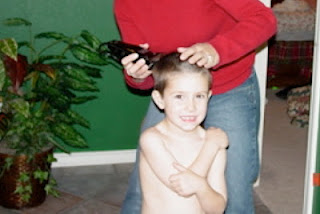 I was actually babysitting Luke with a friend at the time.  We were painting my sister's toenails in the bathroom.  Luke was standing on a little stepstool, examining himself in the mirror.  This wasn't out of the ordinary, since he was very, very self-conscious and "metrosexual" at the time.  (He was four years old.)  He was very concerned about the way he styled his hair, the way he dressed, and the way he smelled.  Axe cologne was his thing.

Meanwhile, Luke had filled the bathroom sink with warm water and was running his wet hands through his hair over and over again, creating little spikes all over his head.  He often did this with gel, so I thought nothing of it at the time.  There happened to be a pair of scissors on the other end of the counter, but they weren't THAT nearby, so I didn't pay attention to those either.

I was painting one of the last of Amy's toenails hot pink when I heard a gasp.  My friend was staring at Luke, who had just taken the scissors and cut his bangs to the scalp.  He'd thought they were too long and apparently he was too impatient to wait until the next time Mom took him to get his hair cut.  Immediately after he finished, Luke burst into tears and said, "I don't like it!"

The picture you see above is after our parents got home.  Luke's bangs were so short that my friend's mom (our neighbor at the time) had to come over with a razor and almost entirely shave his head.
And even THEN, there was an area towards the front of his head that was shorter than all the rest.  To make it even, he would have had to go bald.  (Mom didn't want people mistaking him for a cancer patient.)  Luke was inconsolable for quite a while, begging her not to shave off his hair, until I convinced him that once he was bald, we could dye his head purple and then he'd look like Buzz Lightyear.  He was okay after that.  No joke. 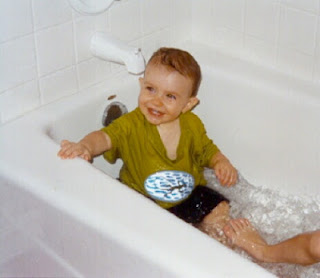 Another funny memory is from back in the day when it was normal to take a bath with the door wide open.  I often shared a bubble bath with my little sister, and it was common for my mom to walk in and out, checking to see if we were okay.  One day, Luke was incredibly jealous that we got to take a bubble bath and he didn't.  He was still very young, but he was quite determined.  He came in, watching us with wonder as Amy and I played with our bath toys.  And then he used all of his toddler strength to climb over the slippery edge of the tub and plop right down into the water, clothes and all.  So that night, Luke did get a bubble bath after all.

And of course there will be the memories of dressing Luke up as a girl many, many, many times.  If you're a big sister and you've never dressed your little brother up in your mother's dress, then you need to start right now (even if he's an adult). 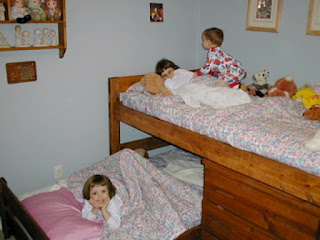 And then of course there are the times when Mom would let Luke say goodnight to me and Amy, back when we lived in our old house and shared a bedroom.  Mom would carefully place Luke up on the top bunk where I slept.  He'd crawl on me and give me a slobbery baby-kiss while I tried to hide like a normal big sister might. 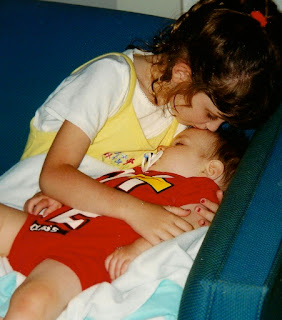 Occasionally, I would be a good big sister and more willingly kiss Luke goodnight.

Happy birthday, Luke.  I'm so proud of the young man you're becoming.
Posted by Emily at 7:33 PM