Today marks a special day in my life.

Two years ago, I was a counselor at Angel Tree Camp, an annual four-day-long camp for kids who have incarcerated family members.  This was my third year to be a counselor.  Being with the kids always taught me so much.  Many of them had been physically and sexually abused.  They all lived with so many doubts, fears, and insecurities.  The girls would ask me things that left my head spinning, like, "We actually get THREE meals a day here?!"  Eleven girls were in my cabin that year, from my city, and they'd been through so much more than I could ever imagine.

I'd just gotten back from Kenya, Africa the month before, so my heart was nearly bursting with passion for the mission field and ending poverty.  While these girls faced different struggles than the kids in Africa did, their trials and hardships were still very real and very painful. 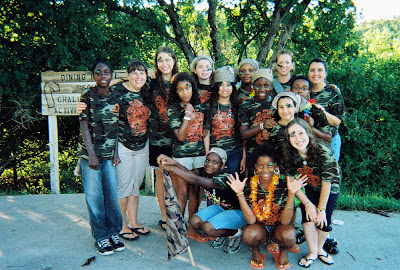 Each night we would go to a big meeting where the camp pastor would speak about God's love and forgiveness and faith.  One night we put floating crosses in a lake and had each camper light a candle representing someone who had hurt them in the past.  When they placed the lit candle on one of the crosses, they were expressing their forgiveness for that person.  The exercise was filled with tearful embraces, painful memories, and a lot of prayers.

On one of the last nights of the camp, after a beautiful prayer walk that lasted much longer than expected, the pastor asked if anyone wanted to be baptized.  This was a spur of the moment decision.  We all sat or stood around the camp's swimming pool, several kids dangling their legs in the still water.  It was about 11:00 at night.  Most of the kids hesitated.  Since nearly all of them lived in the same area of town, they went to the same schools and lived on nearby blocks.  They were all peers.  Everyone was watching.  Peer pressure can be tough on a child who is already insecure.

I immediately felt a tug on my heart from the Lord.  Be an example.  It's time for you to be baptized.  After such a God-filled summer, baptism seemed like the perfect way to declare my commitment for the Lord.  But... I was a counselor, not a camper.  Despite my mental protests, the tug on my heart wouldn't stop.

Several of my girls had given their hearts to the Lord throughout the week.  I could see them hesitating just like I was.  It's a frightening moment to step in front of hundreds of your peers and be baptized.  After a few agonizing moments, I decided to obey the Lord.  My voice wobbled as I spoke to one of my best friends' mom, who was the music leader at the camp.  "I need to be baptized."

"You haven't been baptized?" she asked, sounding a bit surprised.

I shook my head no.  "This is something I need to do."

Still dressed in a pair of denim capris and a t-shirt, wearing glow-in-the-dark jewelry, I stepped into the cold water and embraced my pastor.  When I remember that moment, it feels hazy and far away.  I know I felt God all around me.  My heart was pounding a million miles a minute.  Tears were streaming down my cheeks.  I remember torch light bouncing off the water.  My pastor said a few sweet words about me and then he baptized me before the entire camp.

I remember emerging from the water, hearing the cheers of my friends and kids.  I remember being wrapped in a towel and shivering violently in the cool night air.  My girls practically tackle-hugged me when I returned to the edge of the pool where they sat.  Several of my best friends, who were also camp counselors, tearfully embraced me.  It was such a special, special moment.

Probably thirty campers were baptized that night and a few counselors as well.

I'm so glad I obeyed God's whisper in my heart.  I will never forget that night.

August 2 will always be a special day in my life because it was the day I was baptized.