The last few days on my college campus have been consumed by a spiritual battle.

On Wednesday, an old man named "Brother Jed" set up a chair in the middle of campus and began to speak.  He wore a cowboy hat tied under his chin with a tassle and he carried a staff with a crucifix nailed to the top.  His wife stood a few feet away, holding a Bible and attempting to speak with students who passed by.

Many evangelists stand around campus on a normal day.  We have a regular group of Mormons who pass out tracts, sweet old Gideons who pass out Bibles, the occasional young student who will stand on a pedestal with his Bible and scream furiously at passersby, a few Campus Crusaders who will cheerfully share their faith, and we have a few atheists who set up booths as well.  Texas A&M is a campus of much diversity.

However, Brother Jed was unlike what we've seen so far this year.  His words were filled with pride and condescension.  He threatened passing students with hellfire.  He made claims about his own 'sinless' life no man should ever make.  He accused and judged.  It didn't take long for students to gather around him, filled with anger and confusion.

Brother Jed returned on Thursday afternoon, back with his staff and his wife, back with his accusations.  I was walking to class when I stumbled upon this crowd of people.  I could hear Brother Jed's voice over the crowd, but what caught my attention even further were the signs that were being held over his head as he spoke. 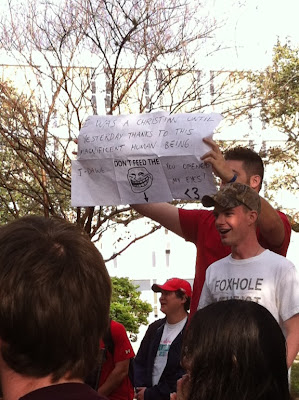 The closer I approached the group, the more I felt baffled by what was going on.  Upon seeing the signs, at first I thought I was viewing an atheist rally.  Some of the signs had lists of 'Biblical contradictions'; others had sarcastic statements about Jesus Christ and Christians.

But the man speaking--Brother Jed--seemed to be preaching a skewed version of the Gospel.

As I walked up behind him, I heard him say, "Ladies, how many of you are virgins?  Raise your hands!"  Since I was out of Brother Jed's line of sight... and no one seemed to be raising their hand... I didn't want to throw mine up in the air and shout, "Me!  Me!  I'm a virgin!" so I kept silent.

No one raised their hand.  Brother Jed chuckled.  "I could tell just by looking that you girls aren't virgins.  Even so, you can be a born-again virgin."

I was nearly brought to my knees by the hate in what he had just said.  My eyes filled with tears and I stumbled away from the group and headed to class.  I was nearly late, but I didn't care.  I could hardly listen to a word the professor said.  My mind spun.  This was a man who was sharing the "Gospel."

The sign that had been held over Brother Jed's head spotted my vision: "I was a Christian until yesterday, thanks to this magnificent human being.  You opened my eyes."  False teacher.  Lies.  Deceit.  Hate.

Where was the love of Jesus Christ in this situation?

After class, I passed by the unruly crowd again.  It seemed even larger; perhaps up to a hundred students were gathered around Brother Jed, shouting at him and causing a scene.  As I walked by, a couple of atheists shouted at passersby, "We're going to hell and we're proud of it!"

I could hear Christians shouting at Brother Jed and arguing with each other.

The campus of Texas A&M had become a madhouse.  I couldn't think.  I couldn't breathe.  All I could do was pray and try not to cry until I was alone in my dorm room.  I felt such a presence of darkness that afternoon.  Satan was using a man who thought he was speaking the truth to tear people away from God.

That was who students now believed Jesus was.  The shouting Christians made things no better.  All I saw on Thursday afternoon on campus was hate, certainly not love.

That night, I went to Life Group and sat and prayed with two of my friends: Lauren and Rebecca.  After we prayed with aching hearts over the situation on campus, we decided to return to that place on Friday afternoon to sit quietly and pray.  The idea filled us with vigor and joy, so we agreed to meet at four o'clock.  Satan would not take the victory.  We knew Jesus Christ could fill even the darkest, angriest place with His love and truth.

This is getting long, so I will continue this story tomorrow.
Posted by Emily at 12:00 PM