A Weekend of Aggie Spirit

I've been extraordinarily busy the last few days.  So busy, in fact, that I haven't even had time to sleep many hours over the weekend.   But being busy isn't necessarily a bad thing.  The weekend was very fun-filled.  I made many memories and enjoyed spending time with my friends... (although I didn't enjoy the studying part so much.) 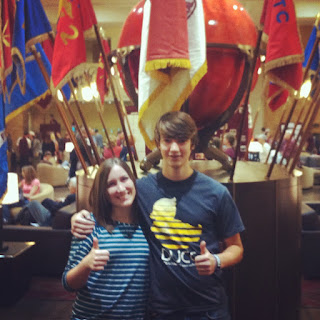 The Memorial Student Center at Texas A&M had its grand opening on Saturday morning.  The building has been under construction for a few years, so its opening was a huge deal.  In fact, one of the speakers said it was the most important place in Texas, even more than the capitol (I wonder if other Texans know this).  Rick Perry, who was an Aggie Yell Leader once upon a time, spoke along with several others.

The MSC was very nice.  Restaurants and games and televisions and art and pretty much everything you could ever want in a student center was at the MSC.  It was cool being one of the first ones to enter that building and experience its awesomeness.  My friend Ian and I sat at a booth in the cafeteria and imagined we were the first ones to ever sit at that booth.  It's exciting to think how many students will be able to enjoy the MSC over the next several years. 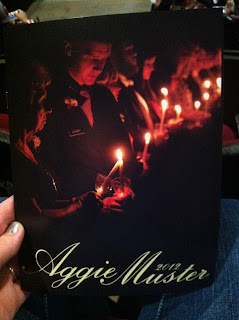 Saturday night was Aggie Muster, which is a ceremony honoring the Aggies over the last year who have passed away.  It was very solemn, but very spirited as well.  I'll never forget the experience of my first Aggie Muster.  And as sad as it seems, it's neat to know that no matter how old I am when I die, I will someday be honored at Muster as well and my name will be spoken during Roll Call.

I love the honor and loyalty that Aggies have for one another.

Yes, this weekend was filled with Aggie spirit.  And on top of that, I was able to watch a couple of great movies (Memento and The Prestige), attend church and Bible study, eat at some yummy Aggieland restaurants, and of course... study for my math test that is coming up on Wednesday.  As long as it's still the school year, I can never put aside studying.

Only a couple more weeks, guys.

How was your weekend?

I will continue the Proverbs 31 Challenge on Wednesday.
Posted by Emily at 11:22 AM