For the battle is not yours. (Seven Fast)

Thursday was the last day of the week-long fast from certain foods (we ate from seven different foods this week).  Sammy and I are undertaking The 7 Experiment: Start Your Own Mutiny Against Excess by Jen Hatmaker.  If you're looking for a Bible Study, I encourage this one whole-heartedly.  I'm two weeks in and already learning so much. 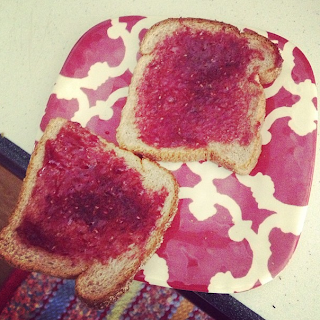 For my final day of this challenge, I actually didn't get the chance to eat many meals!  I had about an ounce of yogurt for a rushed breakfast and then entirely missed lunch due to running late for my job at a homeschool daycare program.  When my friend Stephanie and I arrived back at my house, she triumphantly presented me with raspberry jam to spread on my whole wheat bread.  I looked at the ingredients and it had some corn syrup in it, but was pretty much all raspberries, so I rejoiced and thanked God and savored my small meal.

At midnight, Sammy and I broke our fast with chips and queso, tacos, and prayer of thanksgiving to God for His provision and sustenance this week and in our lives (and yes, we also had soda, much to our delight).  The Lord has given us so many blessings and I am only beginning to taste what that even means.

I arrived home in the early morning hours and made some chai with milk and sugar, as Kenyan-style as I could make it.  I am immeasurably blessed and I hope to encourage others with these truths I am learning.  I don't need a lot of foods; I am sustained in Jesus.  However, I am blessed to have the choice of what I eat each day.  And I am all the more determined to bring aid to children who don't have a choice in whether or not they will eat each day.  They have just as much value as I do.  If I am comfortable in my "much" while there are people starving, what does that say about my character?  No more.

Last night, I was reading 2 Chronicles 20:1-30.  This passage is a fantastic example of what it means to fast with a pure and sincere heart.  God is glorified so well through fasting!

Basically, in this story, some wicked kingdoms brought a vast army to fight against Jehoshaphat (the king of Judah).  Jehoshaphat was alarmed, so he immediately went to inquire of the Lord.  He proclaimed a fast for all of Judah.  "The people of Judah came together to seek help from the Lord; indeed, they came from every town in Judah to seek Him. (v4)"  Entire families - men, women, and children - stood before the Lord.

Jehoshaphat stood in the temple and declared praise for the Lord and confidence in His deliverance.  He said, "If calamity comes upon us, whether the sword of judgment, or plague or famine, we will stand in Your presence before this temple that bears Your Name and will cry out to You in our distress, and You will hear us and save us. (v9)"

After that, a man named Jahaziel prophesied and confirmed that the Lord would save them, that in fact, they wouldn't even have to fight in battle.  "Do not be afraid or discouraged because of this vast army. For the battle is not yours, but God’s. (v15)"  After that, Jehoshaphat and the entire kingdom fell on their faces and worshiped God.

The next morning, they left bright and early with the vast army still waiting for them.  Jehoshaphat told everyone, "'Have faith in the Lord your God and you will be upheld; have faith in His prophets and you will be successful.'  After consulting the people, Jehoshaphat appointed men to sing to the Lord and to praise Him for the splendor of His holiness as they went out at the head of the army, saying: 'Give thanks to the Lord, for His love endures forever.'  As they began to sing and praise, the Lord set ambushes against the men of Ammon and Moab and Mount Seir who were invading Judah, and they were defeated."

This Bible story about fasting is amazing.  It is such an example that when you place your trust in God, He will sustain you, whether your struggle is hunger or fear.  He is faithful.

One year ago: Revival: Yearning
Two years ago: Oh, Africa
Three years ago: Strange Emily
Posted by Emily at 12:00 AM