Over the last week, Sammy and I have taken on the first challenge of The 7 Experiment.  We chose to eat from only 7 foods for a week while also sticking to water as our only drink. 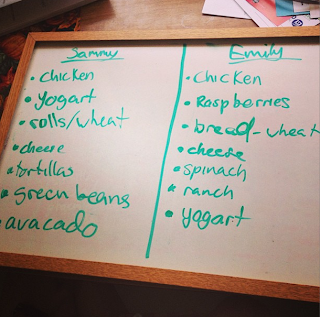 Here are my daily experiences from this challenge so far.  Get ready for some major foodie talk.  Definitely not the norm on this blog. 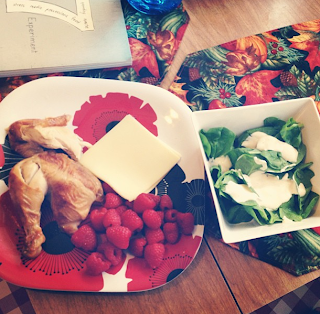 For dinner, I had rotisserie chicken, Swiss cheese, raspberries, spinach salad, and Ranch (of which I went a little overboard by accident).  I was hungry, so I think my eyes were bigger than my stomach and I actually ended up putting most of the chicken in a baggie and saving it for another day.  For a first meal, I thought this was delicious!

On the other hand, Sammy was feeling a little less hungry.  She used tortillas, chicken, avocado, and cheese to make a small taco.  She then proceeded to chug almost her entire water bottle!  I was impressed because Sammy usually abstains from drinking water entirely. 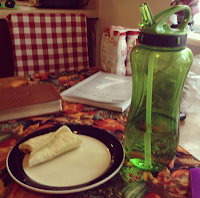 The most difficult part of the night was the fact that a Christian fraternity at our university was having their annual root beer keg party.  Now, I'm not one to go to keg parties, but when they're hosting root beer only, I'm game (I do love my soda).  It hurt a little to miss this event.  Spending the evening in prayer and Bible study and then fellowship with some freshmen while we watched Treasure Planet was just as sweet as the alternative, if not even better. 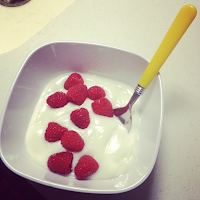 When I got home later that night, I was hungry.  Sammy had made brownies for the freshmen, and although I don't like chocolate, the smell of food in the house had set off our appetites.  For a midnight snack, I had a little bowl of yogurt and raspberries.  It turned out to be a fantastic snack; I'll have to keep it in mind for the future.

A pitiful thing is that since I haven't had soda today, my head began to ache around ten o'clock at night and hasn't stopped.  Caffeine withdrawal.  It's ridiculous the headache I have.  The fact that I have been this dependent on caffeine for as long as I have is not even a little bit okay.

First day of the fast is over and I have a bunch of encouraging and convicting thoughts churning around in my head.  Talking through this entire thing with Sammy was extremely challenging for both of us in terms of what is excess and why we've indulged in needless excess for so long.  My heart is aching a little as I end this day.

I accidentally slept through breakfast this morning, so I went ahead and moved straight to lunch.  During my shopping spree on Friday, I purchased some raw chicken, which was my plan for one of today's meals.  Unfortunately, I have never actually cooked chicken before, so I was at a bit of a loss.  I was resorting to YouTube when one of my roommates walked in and revealed to me a secret weapon hidden in our house: a George Foreman Grill.  Perhaps this is another example of how I have lived in excess for so long (and am still today), but I did use the grill. 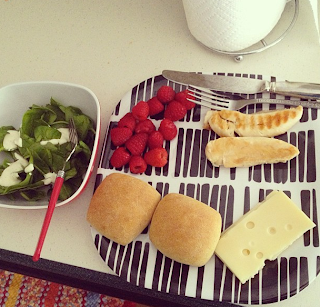 I enjoyed two strips of grilled chicken for lunch, as well as a bit of Swiss cheese, spinach salad (with much less Ranch this time), raspberries, and two delicious wheat rolls (without butter).  Water, I admit, is getting a little old.  However, I cannot help but remind myself that water is a precious commodity around the world that so many people do not have.  I am blessed to have my jug of water.  It is completely satisfying to my needs.  God is faithful.

My mom is participating in The 7 Experiment (and chose to eat chicken, tomatoes, bread, bananas, potatoes, peanuts, and lettuce), so I've been getting texts from her about her progress.  Her biggest challenge today was the Aggie football game.  Although my parents live hours away, they still are avid fans of Aggie football.  A good friend brought over some delicious, home-cooked tenderloin steak... and my family is definitely a steak family.  Can you imagine the temptation?  Whew!

Sammy and I were at the actual Aggie game against Sam Houston State University tonight.  We braved the rain to watch our team win by a landslide.  A big temptation was the smells of delicious game-day food all around us: nachos, hot dogs, BBQ, pretzels... mmmm.

After returning home, I felt a little discouraged to go back to the "same old, same old," but I am thankful for the opportunity to reflect on how blessed I truly am.  This seems to be the theme for this week so far.

When I want to turn around and complain that I'm sick of chicken, or dislike my salad, or wish I had seasoning, or am craving caffeine more than ever, I am stunned by the vastness of God's grace.  He gave me so much and yet I am wanting more, more, more.  Even when I give something up as an act of worship, my selfishness still asks for more.  The Lord is good to me.  He gives more than I need.  He extends so much mercy.  And I am learning, I really am. 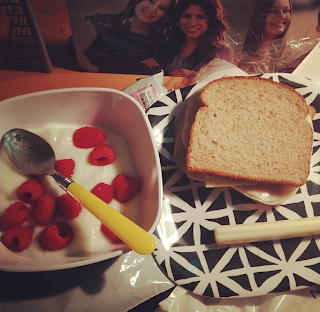 The symptoms of having no caffeine for the last 48 hours are getting better.  I still have a slight headache, and I have experienced the other typical medical symptoms of drowsiness, restlessness, and slight irritation.  But with each passing hour, the symptoms are fading.  I'm starting to fall back into my usual self.  Who knows?  By the end of the week, I may be feeling even healthier than usual.

For dinner, I had yogurt and raspberries again, a stick of string cheese, and a sandwich consisting of Swiss cheese, wheat bread, and sliced deli chicken.  I was craving some deli turkey, as well as some chips, but for the first time, I didn't cringe when reaching for my water bottle.

A little later, I had a midnight snack of two wheat rolls.  Those things are delicious and the most filling out of all of my food choices.  I have never been more thankful for wheat bread.

I did not eat breakfast before going to church.  I know, I know, it's bad, but I slept in a little late and honestly didn't feel like having dry wheat bread or vanilla yogurt to start off my day. 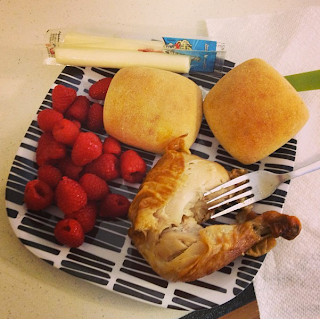 After church, I was hungry and ready for lunch, but my appetite again failed me.  Today has been the hardest so far of this fast because my appetite has simply vanished.  The idea of having the same thing again is a little wearying, but I am repeating my promise verse over and over again and reminding myself that God has blessed me with this food out of His unfailing love and compassion.  He is good to me and I need to learn to be more thankful than I am.

I had two wheat rolls (the best part of my meal, by far), a handful of raspberries, two cheese sticks, and a chicken leg.  The chicken was a little old, so I didn't eat much.  However, the raspberries and bread were delicious today.

My appetite did not return for the total of the afternoon.  An overload of math homework kept me busy instead.  I went to Deaf Church with Sammy and AJ, where someone was drinking coffee that made the entire room smell lovely.  By the time we got back to my house, I was feeling torn between hunger and frustration at my limited diet options.  I wandered around to Subway and Wendy's, but I never went inside the restaurants.  Instead, I returned home and decided to make myself a salad. 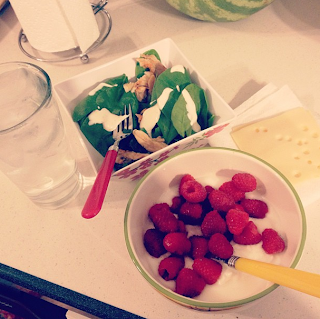 Dinner ended up being pretty good.  I stuck with a spinach salad, a few strips of grilled chicken, and Ranch dressing.  I also had two pieces of Swiss cheese and a bowl of yogurt and raspberries for dessert.  I've been craving something sweet to drink.  While I usually don't like cold water, I decided to shake things up and drink out of a glass with ice instead of my usual giant blue water bottle.  This actually helped quite a bit in making my water appealing.  Ice is such a wonderful gift.

Although today has been the most frustrating of this fast so far, I'm still learning a lot.  When I see other people eating things I wish I could have, I am consistently reminded of how entitled I have been and how blessed I truly am with the things God has given me.

I can't imagine what it would be like to eat only a small bowl of rice every single day for the entirety of my life, as many who are living in third world countries are forced to do.  My seven food choices are healthy, filling, and fresh.  My needs are met.

Have you fasted from anything this week?  What have you been learning?

Two years ago: Kinzy
Three years ago: Pointing Fingers
Posted by Emily at 12:00 AM