Boarding the Jewel of the Seas

Our final morning in San Juan, Puerto Rico was spent exploring the downtown city. Old San Juan can best be described as colorful. The steeply inclined streets are lined with brightly-painted buildings on both sides. There is a true Spanish feel to this part of the island.

Mom, Amy, and I walked along the cobblestone streets while searching for a souvenir shop. We each bought a t-shirt (a tradition for every island we visit when on a cruise) and then met up with Nawnie and the boys a few blocks away.

Our time left in Puerto Rico was limited, so my family attempted to visit a fort but had to leave early. A few of these ancient structures can be found along the coast, reminiscent of a time when such protection was necessary. Although we did not reach the top of the tower, we were able to admire the massive walls around us. Nawnie was amazed by how old it all looked, pocked and blackened by the force of time. 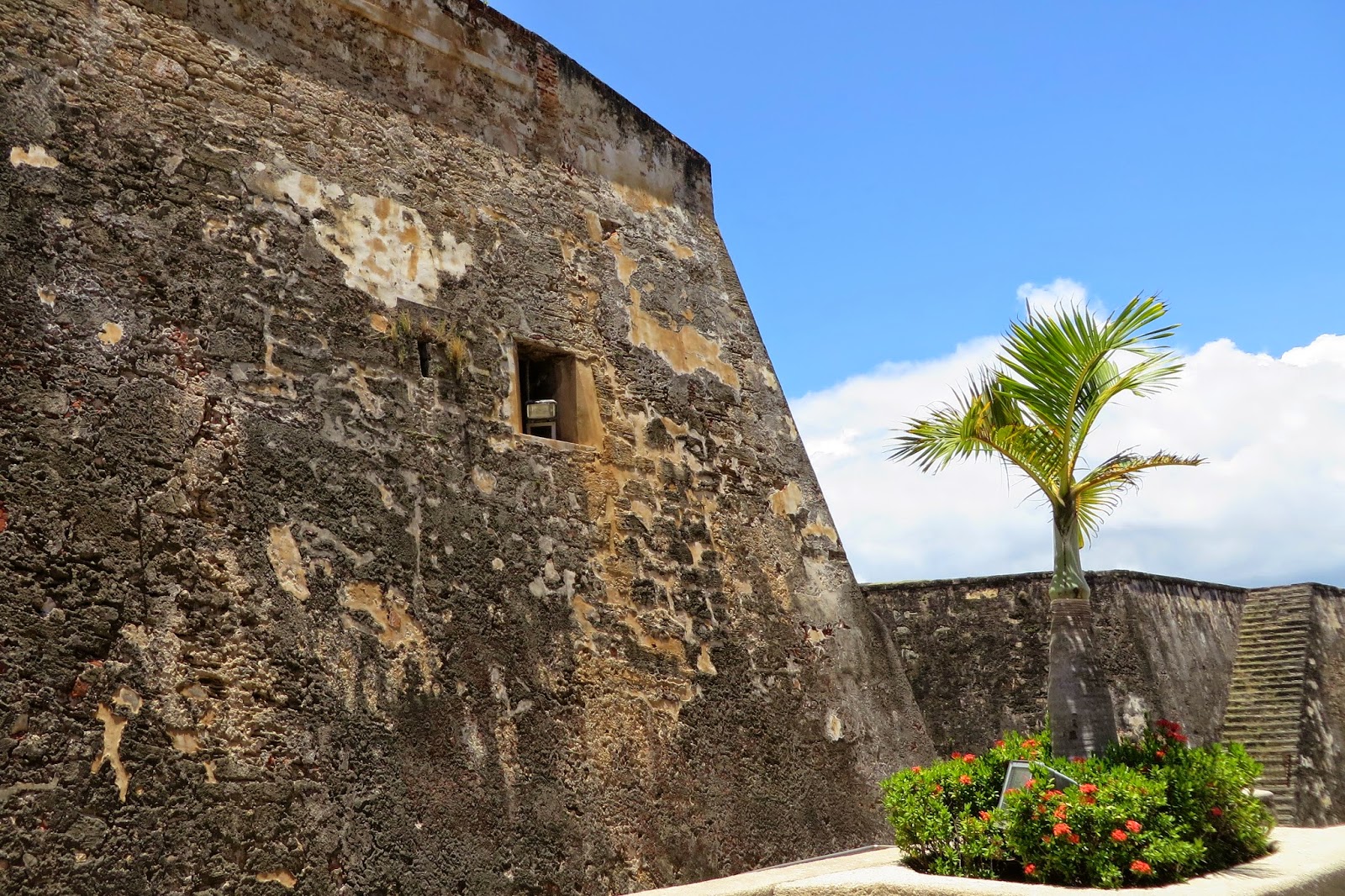 San Juan is quite the diverse city. Although our hotel is exceptionally beautiful, it is located only a mile or two outside of Old San Juan. Many of the buildings around ours are aging and marked with scrawling graffiti. Other parts of the city are fully Americanized, newly-painted, and modern. We've counted endless Walgreen's, Starbucks, McDonald's, Chili's, and Burger Kings.

A few differences from the average American city (other than the fact that nearly every sign is in Spanish) is that chickens can be found wandering the city streets nearly everywhere you turn. I even spotted a few horses and grazing cattle. There are also many feral dogs and cats around that offer passersby wary scowls.

The homeless and hungry also seem to be prevalent in San Juan, even in some of the most Westernized areas. While many stand on the street corners and shake cups, others sleep among bags against crumbling buildings. Homelessness is certainly not unique to foreign places; America has a huge homelessness problem as well. But when I looked out the window of my family's rental car as we passed by the drawn faces of the hungry, I pleaded with the Lord to open my eyes and my heart to the broken parts of the world I will not see during this vacation. 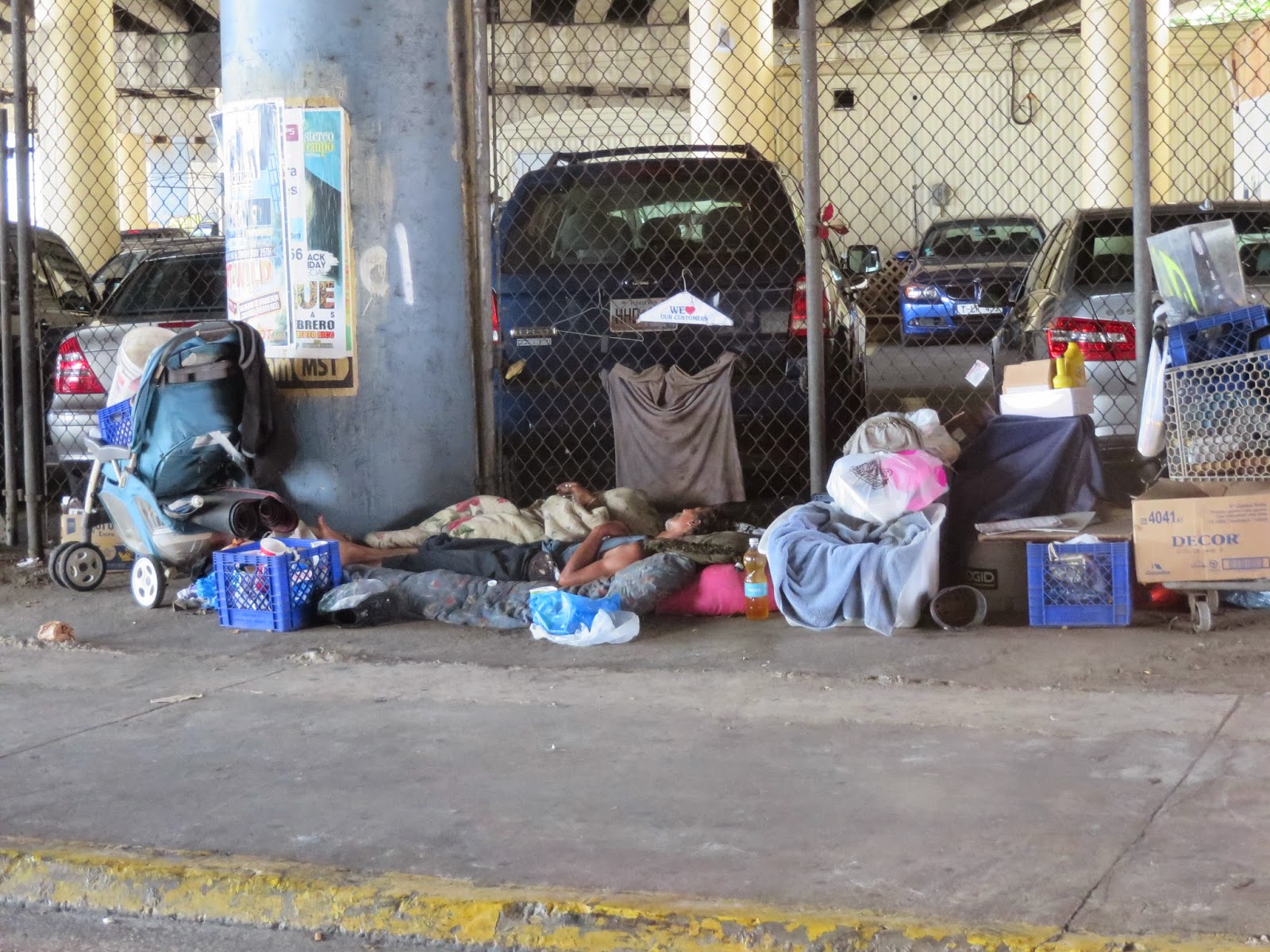 For lunch, my family ate at Sizzlers, a restaurant located on the edge of a pier. We had the best view of our cruise ship from a distance as we dined. The ocean water is so clear that from the window of Sizzlers we could look down and see the fish swimming along the pier. 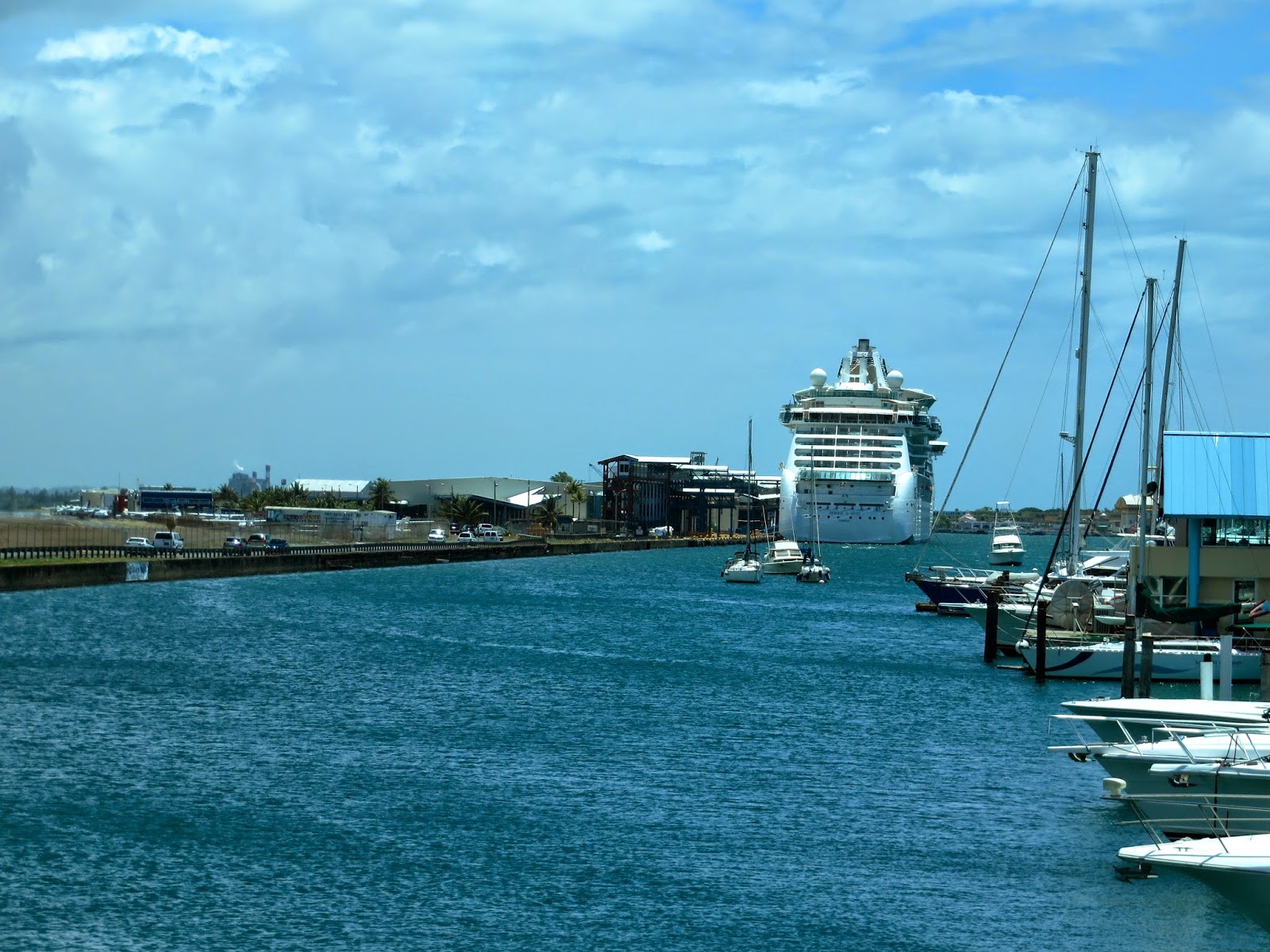 It was eventually time to board our ship, Jewel of the Seas.

We are cruising with Royal Caribbean. There are multiple levels on this massive ship, and while it's smaller than our last, it's difficult to tell a size difference at all without a side-by-side comparison. My family made up our own tour as we wandered through the many restaurants, miniature promenade, and thirteen decks. We met up with Grandpa Frank, Grandma Marcia, and Courtney just in time to visit Tides, the restaurant in which we will be dining nightly throughout the duration of the cruise.

Tides is a nice restaurant; clothing choices like flip flops, bathing suits, and shorts are not allowed, while they are permitted in the lunch dining area. However, my suitcase failed to be brought to my cabin in time for dinner, so I showed up at the table in cargo shorts and Chacos. I'm thankful for graceful staff and a family with a good sense of humor.

Outside of the dress code issue, dinner was perfect. The menu offered several options, but I chose shrimp cocktail, a fruit medley, prime rib, peach and blueberry crumble, and I shared a creme brûlée with my dad. (I doubt I will be sharing all of my food choices here from today forward, but this sort of fare is not my usual and I was enchanted by the meal tonight.)

Muster was held at eight. The entire ship gathered to practice an emergency drill in case of a Titanic-like scenario. Although it's a hassle to go through every safety drill and precaution, there is something settling about embarking on an ocean journey while knowing there is a carefully-set plan in case something goes wrong.

Soon after returning from Muster, I began to feel the gentle yaw and pitch of the ship beneath my feet. It had begun to move away from shore and towards our destination. My brother, sister, and I stood on the balcony and leaned against the guardrail as we watched the brightly-lit Puerto Rican skyline grow dimmer and smaller on the horizon.

When out on the ocean at night, everything outside is black and silent except for the whisper of waves against the ship's sides. It's an eery feeling to look out from the balcony and see nothing at all except for a few white wave caps fanning around you in the inky darkness below.

Cruise ship cabins are always efficiently small. Our shower spans a tiny circle. Our floor space is limited. The sleeping arrangements are perhaps the most entertaining. Amy, Luke, and I share a single cabin. Amy's and my full-size bed thankfully splits into two twins. Luke's bunk hangs from the ceiling and is perfect for his boyish spirit. He is thrilled to sleep on a top bunk like a sailor; this is much more adventurous than any pull-out sofa sleeper.

Feeling the excitement of the departure, Amy chose to sleep on our cabin's balcony in a beach chair, wrapped tightly in blankets and breathing in the breezy (although muggy) ocean air. (An update on this scenario is that Amy ended up retreating back into the cabin at four in the morning when it began to rain.)

Three years ago: 10 Bloggie Tips to Follow
Posted by Emily at 12:00 AM