If you’re looking for a modest fundraising goal to help a family in need, give a goat. 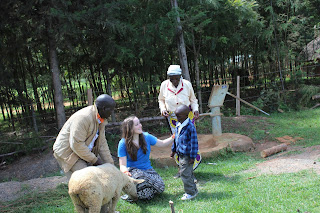 For $50, a goat (or a sheep in some areas) can provide a family with income, with milk, with wool, with future baby goats that could eventually make a flock.

What is neat about giving farm animals to families in developing countries is that instead of giving a one-time meal, you are equipping families with resources to provide for themselves. A goat could ultimately help a family afford many meals.


Last year I was able to present a sheep to my sponsored child, David, and his mother. I had never done something like this in person before and it was life-changing to see the look of astonishment and excitement on the faces of David and Helen. They own a small farm, so a sheep (who happened to be pregnant with twins) would raise their income tremendously.

The money for the sheep came from a change jar that my roommates and I kept on an in-table right in front of the doorway of our house in college. When people came to visit, they emptied their change into the jar. We called it the David Jar.

The spare change of friends and family became an income for a needy family.