Naomi is an orphan on Mt. Elgon. Both of her parents died from AIDS, leaving their two young children in destitution. 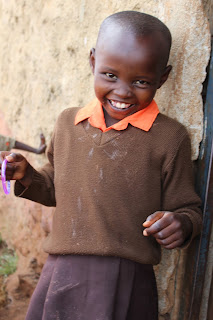 Naomi and her brother Isaac went to live with their grandmother, Chedras. Elderly, illiterate, and widowed, Chedras has no trade to help her provide for these two kids.

One year ago, this family lived together in a one-room mud hut with a grass-thatched roof. After a brutal rainy season, the house was literally falling in around them. They had no access to clean water, so Naomi was infected by parasites that had contaminated the family’s drinking water. The medicine that could make Naomi feel better cost $1, but they could not afford even that.  Naomi wished she could afford to go to school more regularly. Her dream was to become a nurse one day so she could help the sick people in her village.

After she was sponsored, Naomi thrived. She now wears a crisp orange uniform and isn’t sick any longer. She has access to clean water at school—and there is a water well in her village now too! She is on a nutritious diet for the first time in her life. Naomi writes letters to her sponsor almost every month because she is learning how to read and write. And best of all, Naomi knows and loves Jesus. 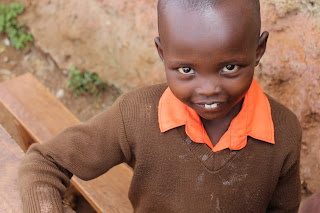 My biggest concern for Naomi was when her house would eventually cave in. When this day came, Naomi and Isaac would have to move into an orphanage because they would have nowhere else to go. This family is small, but they have each other. To be separated would be to strip Naomi from what little family she still has on this earth.

For Christmas, my dad gave Naomi’s struggling family a new house with an iron sheet roof that will hold up through many more rainy seasons. I am excited to see this home with my own eyes in a matter of days.

You can sponsor a child like Naomi today. www.christianrelieffund.org/sponsor
Posted by Emily at 4:19 PM