When I met Caleb, he was thin and quiet. I was visiting the village of Metkei in the Rift Valley of Kenya. Although Caleb was shy, he carried with him an air of determination - and between his explanation and that of the CRF field worker, I heard more of Caleb's story. 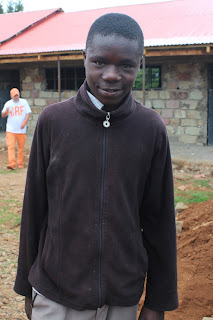 Caleb is an orphan. He has been on his own since his early childhood. He was able to find odd jobs to make it through primary school, but high school fees in Kenya are much higher. Caleb passed his high school entrance exam with a high score... but he had to repeat the eighth grade. And he repeated it again.

At the same time, Caleb's nutrition was low. He did not always eat every day, and when he did, he had small portions of sukuma wiki (kale meant to "stretch the week") or rice. He was hungry, malnourished, and he could not complete his education. Caleb was at a loss.

A CRF worker found Caleb making a deal with a local black market doctor. He would sell one of his kidneys in exchange for enough money for some food and his high school tuition.

This doctor was sketchy. Caleb may have died from the incision and the procedure. He may have been swindled out of both kidneys and left to die.

Whatever would have happened, a child like Caleb - 14 years old - did not deserve to sell an organ in exchange for some food and school tuition. Immediately, Caleb was taken into the Christian Relief Fund sponsorship program. He found a sponsor and is now making fantastic grades at the Suzy Peacock High School.

Not long ago, Caleb wrote this letter to his sponsor.

I am Caleb, aged sixteen years. I am saying thanks for helping me so that I can continue with my education. I was about to sell my organ, but God heard my prayer and guided me. He showed me another way by which I can succeed with my education. Thank you so much. Education is the key to my life. I will keep on praying for you always1 I love you. Now I know that my future is bright. I was about to lose my life, but you are a hope in my life. Thanks a lot.