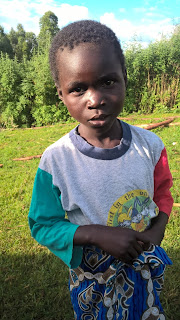 At six years old, this child is a total orphan who will never remember her parents. They were slaughtered during the brutal war on Mt. Elgon. Lillian lives with her elderly great-grandmother, a woman in her nineties, and many other small children. The family was starving to death, so a CRF field worker named Peter photographed the children to enter the sponsorship program.

There is poverty, and then there is total poverty. Lillian fit into the latter. She was desperately malnourished. She was not expected to live past early childhood. No one had bothered to clothe her after all of the years she had wandered around the village, hungry and lonely and so, so young.

To preserve Lillian's dignity, Peter borrowed a neighbor woman's leso cloth and wrapped it around the little girl's waist before he took her sponsorship photograph. 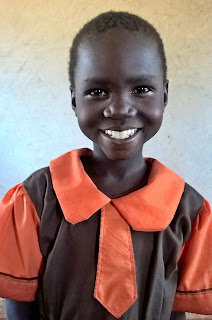 It took less than an hour for someone to choose to sponsor Lillian after I shared her story on Facebook. The support she would receive from sponsorship would provide her with daily food, basic medical care, clothing, and education.

Soon after Lillian was sponsored, I received a new photograph of her. No longer did Lillian stand with sunken eyes and ashen cheeks. She was smiling and already so much healthier than she was before. Best of all, Lillian stood in a crisp school uniform, covered by clothes that proclaimed her modesty and dignity and status as a valuable child, as a loved child, as a nurtured child.

I was so eager to share this photo with Lillian's sponsor, but unfortunately, she had passed away only a week before. This woman felt love and compassion for Lillian, even as she struggled with her own battle of breast cancer. In her last days on earth, Lillian's sponsor lived out Isaiah 58:6-9. She has left a legacy in Lillian, who is now sponsored by this woman's husband.


“Is not this the kind of fasting I have chosen:
to loose the chains of injustice
and untie the cords of the yoke,
to set the oppressed free
and break every yoke?
Is it not to share your food with the hungry
and to provide the poor wanderer with shelter—
when you see the naked, to clothe them,
and not to turn away from your own flesh and blood?
Then your light will break forth like the dawn,
and your healing will quickly appear;
then your righteousness will go before you,
and the glory of the Lord will be your rear guard.
Then you will call, and the Lord will answer;
you will cry for help, and he will say: Here am I."

Lillian's story broke me, because even with my job as the Kenya Director of a nonprofit, I forget that there are little girls walking around who do not even have a rag to cover themselves. I forget about the forgotten and the voiceless.

Lillian was remembered. She was cherished. And the fasting of Isaiah 58 was carried out in her story.
Posted by Emily at 4:43 PM