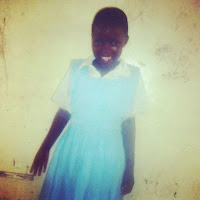 Lavin was a beautiful little girl with big brown eyes, short curls, and a smile that could light up an entire photograph. As soon as I saw her, my heart whispered, “She is God’s daughter. She is my daughter.” Lavin’s smile shined up at me from one of the several picture frames blanketing the Christian Relief Fund table. She seemed thrilled to be wearing her pale blue school uniform, excited for the opportunity to have a sponsor of her own.

I was fifteen at the time and a freshman in high school.  As I signed my name, agreeing to become her sponsor, I couldn’t help but feel a strong love for this sweet little girl I’d never met. I knew this love could only come from Jesus. Through her struggles, Christ loved her unfalteringly. He had a plan for Lavin, a plan to give her hope and a future.

In ten years of life, Lavin had experienced the unimaginable: losing her father to AIDS, living in a one-room mud hut with no running water and no electricity, spending days of hunger and thirst in sweltering heat, and getting a late start on her education because of living in utter poverty. With the help of Christian Relief Fund, I had the opportunity to shine the light of Jesus into Lavin’s future.

Receiving letters from Lavin was exciting enough to brighten my entire week. As she learned to write, her letters grew in form and maturity, changing from, “I am Lavin. I like football,” to stories about her day and what she had been studying in the Bible. My little girl was growing in strength and boldness. Her words reflected a heart for Christ.

When I was sixteen and Lavin had just turned twelve, I traveled to Kisumu, Kenya with Christian Relief Fund. “Does anyone know Lavin?” I asked the crowd of giggling uniformed children at Ring Road who crowded around me, all wanting to ask questions and touch my long curls. 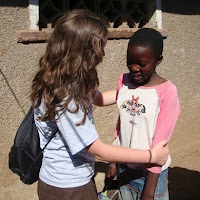 “Lavin!” they began to call until a young girl stepped forward, staring up at me with wide eyes. She was small and quiet, but a smile was beginning to appear on her face. Recognition.

Lavin nodded quickly. “You are Emily.”

The week I had with Lavin was filled with precious memories. My favorite moment was after we spent an afternoon watching the schoolchildren play football. When it came time to return to Ring Road Orphanage and walk through the slums, Lavin hooked my arm in hers. “Come, let’s sing,” she said, grinning at me with that infectious smile of hers. Skipping through the slums, arm-in-arm, Lavin and I began to sing a song we’d improvised a few days before: “Jesus loves me. Jesus loves you. Yesu ni Bwana, Yesu ni Bwana (Jesus is Lord).” Members of the community stepped out to watch us and wave, smiles breaking out on their worn faces.

In that moment, Lavin and I were not separated by our cultures, by poverty, by language, by distance. We were two young girls made beautiful in Christ. We were created and cherished by the same God who gave us breath. We were friends. We were sisters. She was my daughter.

Recently, I received a new photograph of Lavin. She has a grin on her face and is still wearing a pretty blue uniform. She’s beautiful and so grown-up now. Nearly five years have passed since I became Lavin’s sponsor. In fact, Lavin is the same age now as I was when I first began to sponsor her. Fifteen. 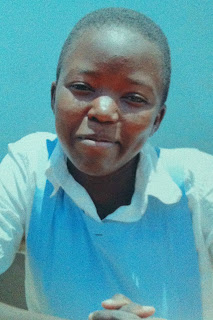 Letters from Lavin have become even more special to me now that we’ve truly become friends. Her words are relational. “How is your little sister? I have been praying for your friend’s knee surgery. I like to write, just like you. Remember when we danced through the streets together, singing ‘Yesu ni Bwana?’ I miss you, mother. I miss you, sister.” I miss her too.

When I think about Lavin, I no longer imagine a child whose future is dark and destitute. Thanks to Christian Relief Fund, Lavin’s future is bright. She will have opportunities to go to college, to become a teacher, to help other little girls just like her one day.  Lavin isn’t hungry anymore. She has nourishing food. She has shoes. She is receiving a great education. 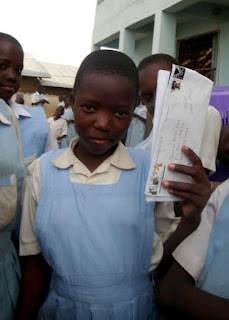 One of my most recent letters from Lavin said, “I want to make you proud.”  She has, with her joy, her courage, and her sense of unending hope through the darkest trials.

If you do not sponsor a child, I encourage you to do so. Sponsorship through Christian Relief Fund transforms a child’s life. They are given nourishing food, basic medical care, clothing, and education. They are taught the Gospel and given Biblical training. You can send letters of encouragement and love to your child, showing him that someone across the ocean loves him with the love of Christ, even if no one else on this earth does.

And when your child writes you back, perhaps you will have a chance to learn as well.

Looking back over the last five years of sponsorship, all I can see is love. Christ adores this precious little girl. He has big plans for Lavin. Her future is bright with hope.

Will you change a child’s life today?

Most of you have probably heard about the shooting near Texas A&M University.

It was a little after noon.  I was not yet up and ready for the day.  I was reading in my bedroom, lost in a good story, when a series of bangs jolted me into complete awareness.  Was someone knocking at my door?  No, it wasn't that. Fear froze me still for a moment, before I peeked out the blinds of my window and then sat nervously on my bed, unable to see anything from my bedroom.  Who could be shooting?  What was going on?

Stop being silly, Emily, I told myself. Obviously no one is shooting. This is a good neighborhood. Your neighbors are all so nice.  Who would be shooting?  Why would they be shooting?  I had just seen The Bourne Legacy late the night before.  Scenes from the movie still lingered in my memory.  Although the loud banging continued to echo through the neighborhood, I quickly convinced myself all I heard was merely loud, annoying construction work.  Or firecrackers.  Or anything other than a gun.

I got up and began to get ready for the day.  The banging sounds stopped for a little while and in typical fashion, I pushed them out of my mind almost immediately.  See?  No worries.  Everything was safe.  A few minutes after the noises stopped, loud sirens began to blast through my neighborhood.

Only a large number of police cars and ambulances could make a sound like that.

And then I got the Code Maroon text.  Texas A&M has a website and a texting/email tool that sends out mass messages to students when there is danger.  I'm notified immediately after robberies occur in Aggieland or when there is a tornado nearby.  On this particular day, the Code Maroon texts said that there was an active shooter on a street much too near my own.  "...Please avoid the area.  Residents in the immediate area need to remain inside their residence. 12:29 PM."  Other Code Maroon texts and messages from friends began pouring in at that point.

My first response was to start crying, praying out loud, "Jesus, please let me be safe."  And I began to pray for my friends in Aggieland that I knew were already out and about.  Then I prayed for the people I didn't know who were certainly being affected by this shooter.  My hands were shaking.  What a horrible, horrible thing to happen.  A shooter in Aggieland.

I paced around my house, wringing my hands and pleading with the Lord.  The wait wasn't long.  At 12:44, I received a text from Code Maroon saying that the shooter was in custody.  Thank God.

I found out later that the shooter, Thomas Caffall, was dead, along with a constable named Brian Bachmann and a civilian named Chris Northcliff.  A civilian woman who was moving her child in for college and three officers were also injured during the shooting, but as far as I am aware, they are alive and recovering.

What a horrific, horrific thing.

My mind can't fully wrap around how a man could so casually take the lives of those around him.  It's hard for me to understand what kind of a world this is where evil so easily happens, where a violent, terrible tragedy can hit so close to home.  My heart is broken for the families that lost loved ones.  My heart is broken for the loss of peace and security in my neighborhood.  There is great unease now.  So much confusion.

It's been a couple of days since the incident.  The crime tape is gone.  No more police cars.  Most of the news reporters have wandered off to newer stories.  But the feeling of sorrow in this community has not yet gone away.  Our hearts are crying out for those affected by this tragedy and for the brokenness of this world in which we live.

The world is so broken.  We wander about our day-to-day lives, living in secure, familiar, comfortable boxes that we are eager to create, but that isn't how life truly is.  With the drop of a hat, every pretense can be shattered.  Life is a mist.  So quickly it can be ended.  Whether we are living in the jungles of the Congo or driving our cars through the streets in Oklahoma, life is not certain.

But there is also joy.

Amidst the brokenness of this earth, we have one thing that matters more than anything else: the love of Christ. God sent his only Son, Jesus, to take the place for our sins.  He died for us.  He experienced the brokenness of this world in a way we never will, but he overcame it!  He rose.  He lives today.  He loves us unfailingly and so strongly desires us to have faith in him so that we may become his children.

John 16:33 says, "You may have peace in me.  Here on earth you will have many trials and sorrows.  But take heart, because I have overcome the world."  We may live in a broken, painful world, but we will not be here for an eternity.  There may be no security for life on this earth, but there is peace in the Lord and hope for eternal life with him.  He brings such peace.

Philippians 4:7
Then you will experience God's peace, which exceeds anything we can understand.  His peace will guard your hearts and minds as you live in Christ Jesus.


August 13, 2012 now carries a horrifying experience that touched many people, not only in my community, but around the United States.  No matter where you live, it is devastating and overwhelming to hear of a story where callousness and evil take the spotlight.

But never forget: evil has not won.

In all of this, through every tear and sorrow, there is love.  Watch the Aggieland community step up and embrace those who have lost loved ones from this tragedy.  There are prayer vigils.  There are words of encouragement.  The Gospel is being shared.  Comfort is offered.  Peace has been found.  Watch as people all across the United States take a stand of righteous anger against what this shooter did to so many families.  Do you see the love shining through?  Do you feel the hope?

In this world, there are sorrows and pain.  What happened on Monday was so frightening and heartbreaking.  But there is still peace.  Love continues to outshine every ounce of hatred and brokenness that caused and came from the shooting.

As always, the love of Christ wins.

Psalm 4:8
In peace I will lie down and sleep; for you alone, O Lord, will keep me safe.