A Pair of Shoes


“Is that your daughter?” 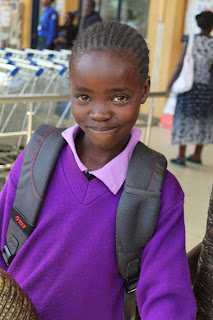 “You would let your own daughter wear shoes like that?” Purity smiled at me, ever-delightful even in her boldness. She was an 8th grader and the leader of the girls at Milton Jones Eagles Academy. My family’s newly sponsored child, Faith, was standing next to me—and to be honest, I was so excited to see her in school that I hadn’t even noticed her shoes.

The shoes were worn ragged. It was a miracle they could stay on Faith’s feet when she walked. I had sponsored Faith for two weeks before I went to Kenya and she had not yet gotten a pair of new shoes.

“You should buy your daughter better shoes to wear,” Purity told me, beaming. She was right.

“You should buy your daughter shoes today.”

“You should buy her shoes right now.”

And that’s how Faith and I ended up sitting hand-in-hand in the back of a crowded matatu on our way to buy new shoes and a school bag. Since then, this trek has been a regular one for us—and it usually involves ice cream now.

Purity’s bold questions left me speechless. She saw what my culture-shocked eyes did not and she was determined to take a stand for the children in her community. She made me aware of an issue she knew I could fix. Purity should have been a politician.

That day Faith got a new pair of shiny, black school shoes. And I gained a new perspective. I will always be thankful for the awareness—and the boldness—Purity showed me in 2013.
Posted by Emily at 2:21 PM No comments: 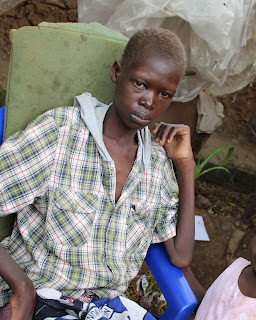 Caroline was one of the sickest people I had ever seen. Her bones pressed against her skin and her hair was white from malnutrition. She didn’t walk and barely spoke, but tears streamed down her cheeks.

At 20 years old, Caroline had been married and given birth to a daughter, she contracted HIV from an unfaithful husband, was divorced by that same husband when he discovered she had AIDS, was abandoned by her parents when they discovered she had the virus, and she moved to her grandmother’s house to die.

Caroline had a four year old daughter: a wide-eyed little girl named Eunice who clung to her mother like Caroline might sift through her fingers like sand at any moment. 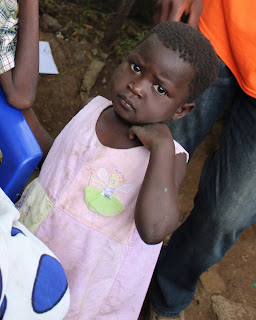 The ARVs weren’t working. The end of Caroline’s life seemed devastatingly near and she was aware of this. Her eyes were clouded by hopelessness. “What is your family’s biggest need?” I asked the grandmother.

“Food,” she replied. The family survived on one plastic bag of rice per week. No wonder Caroline’s medicine was failing her when her frail body had no nutrition to help her fight.

When I looked at little Eunice, I saw Caroline. A partial orphan who would receive no education, who would probably marry young and give birth to children she couldn’t afford to feed. Eunice seemed doomed to follow in the footsteps of her mother into a generational cycle of extreme poverty that neither of them could control.

CRF impacts lives and empowers the poor. Eunice is sponsored now and among the top of her preschool class. Education will reduce her chance of teenage pregnancy by almost 80%. Caroline is receiving daily food. She can walk again—and perhaps soon she will be strong enough to learn a trade and start a business of her own.

This family is full of strong women, and in their future is nothing but healing hope. 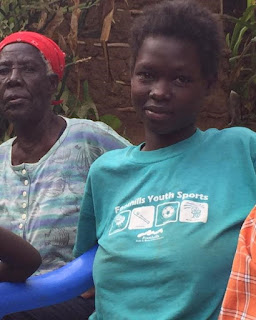 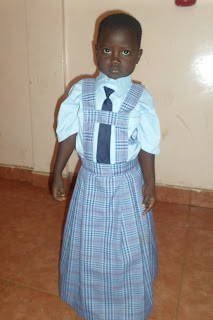 The Most Hopeful Place in the World 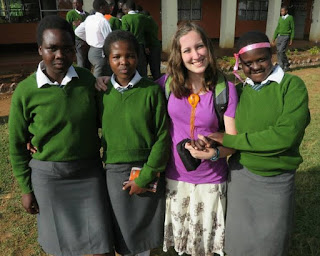 One of the most hopeful places in the world is Suzy Peacock High School in Eldoret, Kenya. The brightest of CRF sponsored children in this area attend school here and rival the best government-funded schools in the nation of Kenya.

The kids at Suzy Peacock know there is hope for them, which makes so much of the difference. They study from 6am to 10pm. They are hard workers. And they truly believe success is possible for them because they are surrounded by the brightness of their futures every single day.

In July I’ll be preaching at Suzy Peacock’s church on Sunday morning. I’ve never preached a church sermon before, but of anywhere I could possibly speak, Suzy Peacock will certainly offer me tremendous grace. They’re joyful like that.
Posted by Emily at 10:43 AM 1 comment:


“I will restore to you the years that the swarming locust has eaten… You shall eat in plenty and be satisfied and praise the name of the Lord your God.” –Joel 2:25-26 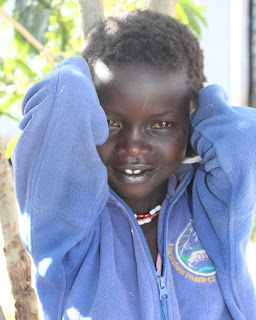 In Kenya last year I met a girl a few years younger than me. She repeated this verse many times when she talked about how God had transformed her life through CRF sponsorship. Once she was a street child, barefoot and hungry with no education. Now she’s in medical school. She has planted churches and shared the Gospel throughout the Rift Valley.

In the slums in Kenya, many orphans have had years of their lives devoured by the swarming locusts of poverty. Childhoods are snatched away by these locusts. Years of innocence and joy are lost.

The Lord walks through sponsorship to create stories of redemption and restoration. He restores the years that the swarming locust has eaten. He gives in abundance.

Sponsorship offers orphans the chance to experience the childhood that was taken from them. These precious children become as overflowing with hope as an abundant harvest, no longer a locust-eaten field.
Posted by Emily at 10:41 AM No comments:

How to Empower the Third World 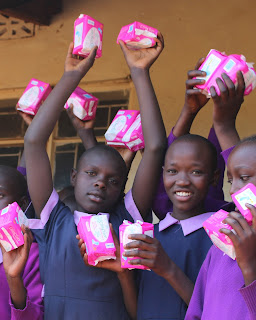 It isn’t an awkward subject. It isn’t a women’s only subject. It’s a matter of equality for girls who have to stay home for a week out of every month during the school year because they can’t afford sanitary products. I’ve heard awful stories of a girl sitting in a hole in the ground for days until her menstruation is over and girls tearing off precious pieces of their mattresses to create homemade sanitary napkins.

According to Femme International, menstruation is the #1 reason why girls miss school. KEMRI/CDC estimated that Kenyan schoolgirls lose 500,000 days of school each year. These girls fall behind their male peers, struggle with monthly humiliation, and it becomes especially difficult to have self-esteem as women loved and created by God.

Two sweet friends of mine, Kim in Texas and Consolata in Kenya, have headed the CRF work to bring sanitary products to girls in the third world. You can give for this issue at christianrelieffund.org/donate.
Posted by Emily at 10:39 AM 1 comment: