Break my heart for what breaks Yours.

We landed in Nairobi early this morning.  The day began wonderfully as each member of our team went through Kenyan customs without any problems.  We picked up our luggage and exchanged our currency from dollars and pounds into Kenyan shillings.  It's always a funny feeling to turn in a couple hundred dollars and receive several thousand back in return.

George was waiting for us at the gate.  As soon as we saw each other, we ran and embraced like brother and sister.  It was great to see him, even if it was only for a few minutes.  He is going to try to travel to Kisumu to see us again on Monday.  I will pray that this will work out.  I've missed George since he left America in January!

We went through security twice more, waited in a room that was blaring a Kenyan children's television show, and then boarded our final flight to Kisumu.

Much to my surprise and delight, several Ringroad kids were waiting with roses for each of us.  These kids are so polite.  They shook our hands, said, "How are you?", and introduced themselves in perfect English.  One fifth grader named Vallary befriended me quickly.  She was a little sassy but came up with the funniest questions, like, "Could you grow your hair all the way down to your feet?"  I told her it would take my whole life, but she thought it was worth it.

After meeting as a team, some of us went to Ringroad Orphan's Day School and some to the Nakumatt to get snacks and water bottles.  Naana, Cassie, Benny, Tori, Nicole, Kevin, and I chose to visit the school.  It's a convenient distance from our hotel; perhaps a fifteen minute walk or less. 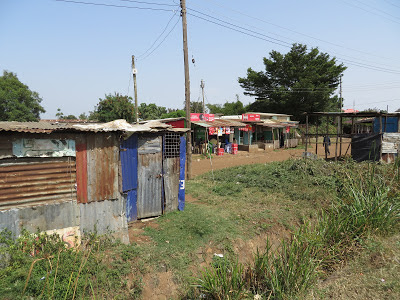 While the slum area surrounding the school actually looks much better than when I was last here, it is still very much a slum.  Half-naked children followed us, giving high fives and shouting, "Jambo, mzungu!  How are you?"  Many carried homemade toys, like old bicycle wheels and sticks.

One little girl named Ivy followed behind me, dancing and chanting, "Take picture!  Take picture!"  I laughed and turned around to snap a picture and the goober made this face.  She really did have the prettiest smile, but you'll just have to take my word for it.

The Ringroad children were actually just being let out from their classes, so we were mobbed by beaming, polite, hand-shaking kids about a block away from the actual school.  Before I even got through the gates, I was tackle-hugged by a soaking wet, shrieking, sixteen-year-old Lavin.  I hugged my daughter for a long time and then said, "My sweet girl, why are you all wet?"  She had been cleaning buckets for the school.

I'll never forget Lavin's face when she clutched my hand and kept looking at me to make sure I was still there.  Her smile was enormous.  "Did you get my letter that said I was coming?" I asked her.  She had and had been waiting eagerly ever since. 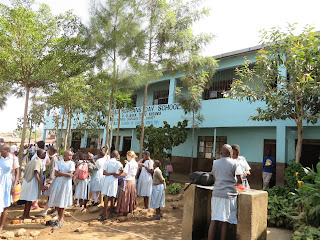 The remaining children in the schoolyard had a "parade" led by Jared and Collins.  Lavin grabbed me again after it was over.  "Come, I want you to meet my teacher!"  Verah, Lavin's seventh grade teacher, is a lovely lady with a beautiful smile.  She is the kind of person you can't help but like at once.  "You are welcome to come to speak to me any time.  Lavin is trying harder in school," she reassured me.

During the parade, Collins asked which of the children remembered me.  Ten or fifteen of the older children's hands shot up before all of the children did the same.  I recognized several kids from my trip in 2009 and was able to call them by name.  It was a darling thing to be able to know and remember my old Kenyan friends, even in such a large crowd.

"Do you remember your song, Yesu ni Bwana?" Pauline asked me.  The entire group of girls who were surrounding me began to giggle.

"Yes, we sing it every Friday on the way to our field games," Lavin answered, grinning.  Several of them sang the song for me.  It is a special thing to have made up a song that is remembered across the world.  My own little legacy at Ringroad Orphan's Day School.

A boy named Emmanuel was the sassiest little guy I have ever met.  The girls were all singing, so I asked him to sing too and he said, "No, I don't sing.  You sing."  So I began to sing 'Jesus Loves the Little Children' and he cut me off with a wave of his hand and said, "Not that one.  Sing another."  I talked to Emmanuel about his hobbies for a bit and he teased me a little longer before sauntering off to make mischief somewhere else.  He was hilarious.

Vallary said some funny things as well.  She would frequently carry Naana's bag for her and Naana would always say, "Are you sure?  It's heavy."  On the way back to our hotel from the school, this conversation happened again, so when Vallary took the bag, she dramatically said, "Oh, this is so hard," and then gave me an ornery grin.  There are some sassy kids here, but I love that. 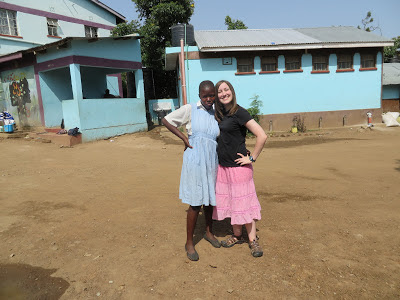 After conversing with a large group, Lavin and I stood back to catch up.  "How is your family?" Lavin asked.  I explained how Luke and Amy were doing, paused, and it took all of five seconds for Lavin to say, "And what about Ali?"  It is clear she reads my letters and sees herself as part of my family, for which I am so glad.

Naana showed our family photos to a few sweet girls and Lavin said, "Is this your grandmother who was ill with cancer?"  I explained how the Lord healed my grandma and Lavin was amazed.  She was so excited to meet more of our family and expressed several times that she wishes to meet my mother.  Lavin asked several times when I got my hair cut.  It is several inches shorter than when I last saw her.

As we hugged and said goodbye for the night, Lavin whispered to me, "I love you."  I am left stunned by how she has grown and matured.  Lavin led me about her school with so much excitement today.  I really did feel like a mother as my girl introduced me to her best friends, Doddie and Emily, and to her teacher.  The way Lavin eagerly showed me piece-by-piece of her life was a precious thing.  When I'm with Lavin, wrapping my arm around her shoulder, holding her hand, meeting the people in her life and hearing her stories, I really do love her in a motherly way.  She is a special girl, so adored by her Father.

We stayed at the school for two hours or so and then bid farewell to all of our sweet friends there.  A few children escorted us back to our hotel.  Three held onto my hands, stroking my hair and asking all sorts of questions about life in America.  They taught me several words in Swahili, as well as some dance moves.  Kenyan kids have rhythm! 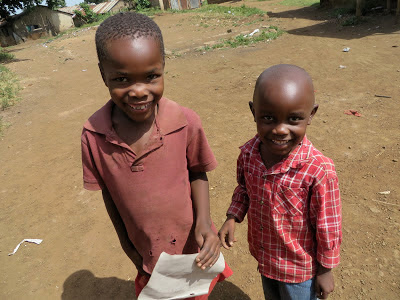 We saw so many unschooled, sweet children living in the slums around the school.  I'd call out, "Jambo!" which caused fits of giggles.  Vallary watched me for a while and then said, "I can see you love these children by your eyes."  I do.

One unsponsored toddler showed up on the school grounds and followed us all the way to St. Anna's Guest House.  We were not sure where he belonged or where he had come from.  Vallary assured us she'd find his guardian.  Naana had her first cry since arriving in Kenya.  This little boy is an orphan and even though he was far too young to wander the streets on his own, no one cared enough to watch him.  He was dressed in ragged clothing and coughed from an illness as he watched us leave him in the temporary care of the few healthy school girls.  Naana so badly wanted to take this child as her own.  This is the difficult part of visiting third world countries; you are only able to serve so far.

We returned to our team with both funny and sad stories, laughing over Ivy's silly picture and crying about some of the hungrier kids we saw.  Naana said she was afraid a child would break her heart and Larry said, "Of course your heart will be broken here."  It's true.  I can't imagine Christ can look on the sickness, malnutrition, and neglect of His beloved children here without a broken heart.  I have asked for God's heart, so mine must be broken as well.  For me to visit a place of poverty without leaving broken, it would be a proud and selfish thing.

We went to dinner at an Indian food restaurant (not my favorite meal) and then retired.  It's only 9:30pm now, but I am exhausted from being on a plane with little sleep the last two nights.  I can't stay awake for much longer.  I was actually nodding off throughout dinner!  This never happens, so I know I am worn out.  I was giving Naana a good laugh.

There was a mistake with the hotel reservations, so we actually have single rooms.  I don't mind.  When I'm tired, I crave a little bit of quiet time for myself, so this is exactly what I need.  God provides so well.

The room at St. Anna's Guest House is very nice.  Our hotel is run by Catholic nuns, so there are pictures of the new pope everywhere we turn.  One big portrait in the lobby carries the label, "His Holiness, Francis."  Interesting.

Church is bright and early tomorrow.  I am eager to see what the day will bring.