I actually slept in a bed last night!  After two nights sitting up in a cramped plane, the hardest bed in the world would have felt like heaven.  St. Anna's Guesthouse was paradise.  I got seven full hours of sleep and then woke up on my own a few hours before we left for church.  I am feeling a hundred times better this morning.  My God heals! 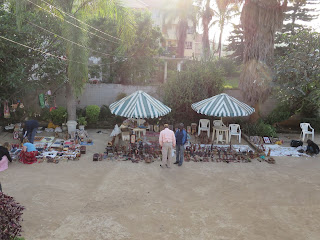 Some talented artisans had set up a little market of handmade carvings and paintings at the entrance to our hotel.  Our team has clearly been marked as American.  We were told by our Kenyan friends that these specific artisans were hard-working men and women with children, so I did haggle a little and buy a few things for family and friends.  I'm afraid Naana was hustled out of some of her money because she doesn't understand the difference in currency yet.  She bought a few items and when I asked her how much she spent, she said five thousand shillings.  That is the equivalent of sixty US dollars!  Next time we go shopping, I told her to check with me before she makes a final purchase.  I think she'll get better at haggling as time goes by.

We left for church a little before nine and took another walk through the slum.  Kids flock wherever we go, shouting, "Mzungu!  Mzungu!"  Mzungu means "traveler" or essentially "white person" in Swahili.

One little family of five brothers and sisters, all under the age of seven, were dancing from across the muddy road, calling out, "Hello!  Mzungu!  Hello!  Mzungu!"  I crossed the street and gave them each a bracelet.  They shrieked and jumped up and down with excitement, more from the fact that they saw a mzungu up close than about the small gifts.  Their father came out, grinning, and told them, "Say thank you, asante-sana."  I so enjoyed meeting this sweet family.

Church is held under a tent in the Ringroad schoolyard.  Benches from the classrooms are carried out to be used as pews.  560 people attended today, the majority being children.  Jim gave the sermon using a translator and did a great job.  He spoke about possessions and having faith in God's provision.

A newborn baby was dedicated to the Lord during our service.  Both parents were present for the prayer, which is such a rare and powerful gift in Kenya.  I pray that more and more families will unite under Christ as the Gospel spreads across this beautiful nation.

I love Kenyan worship services.  In Kisumu, the songs are sung in Swahili, English, and even Luo.  I cannot help but be reminded of Revelation 7:9-10, which says, "After this I looked, and there before me was a great multitude that no one could count, from every nation, tribe, people and language, standing before the throne and before the Lamb.  They were wearing white robes and were holding palm branches in their hands.  And they cried out in a loud voice: 'Salvation belongs to our God, who sits on the throne, and to the Lamb.'"  The church service I saw this morning was a precious taste of what I will receive in heaven when all tribes and languages will lift up praises to our Heavenly Father.  I can hardly wait for this day.

My favorite Kenyan song says, "He has done so much for me that I cannot tell it all."  I even remembered the Swahili version, which goes, "Ametenda maajabu na siwezi kueliza."  (And I guessed on the spelling, so forgive me if I got it wrong.)

The girl sitting in the desk next to mine gave me her songbook to use, which was extremely helpful.  Even if I couldn't understand all I was singing, I recognized several Bwana's and Yesu's.  Christ was praised.

After the service, I met back up with Collins.  He was wearing his Texas A&M shirt as promised.  I gave him an Aggie bracelet.  I'm happy to meet fellow Aggies around the world!  I've been teaching the kids how to say, "Gig'em!"  The phrase makes them all burst into fits of giggles.

I gave Lavin the necklace I bought for her with the charm that says "Daughter."  When she opened the little box, she gasped and said, "How smart!" and immediately put it on.  It looked lovely on her.  The time I am able to spend with Lavin has been such a gift.  Her English has improved so much in the few years since I last saw her.  It is difficult to get Lavin to smile in front of a camera, even though she smiles every other moment of the day, but I captured one this morning!  Beautiful girl.

One precious little girl latched onto me and had me carry her on my hip for the rest of the morning.  I tipped her upside down a couple of times and after that, she would laugh and then fling herself backwards without warning.  I had to hold on tightly to this one.

At one point, two of Lavin's friends named Susan and Doddie pulled me into a classroom with a few other girls.  The schoolyard had become a bit chaotic because of the crowds of excited children, so the classroom was a good place to converse in peace and quiet.  Lavin took my camera and began a modeling shoot with the girls.  They all posed dramatically, asking, "Do I look smart like this?"  They also kept pointing the camera in my direction, so I made some silly faces.

I found a selfie on my camera taken by the lovely Susan.  This girl is fantastic.

Two girls began to braid my hair.  They smoothed it out in their hands and tucked it behind my ears and wrapped the braids around my head.  "Oh, so smart, so smart," they kept saying.  Girls are girls, no matter the country, and one thing nearly every girl enjoys is playing with hair.

The kids began to eat lunch, so my team started to leave the schoolyard.  Lavin joined us, her arm draped across my shoulder.  Larry said I could bring her to lunch.  Oh, joy!  Lavin beamed with the biggest smile when she found out she could come along.  I did too.

What a merry party we made!  I had Lavin, Milt brought his daughter Smuff, Audie had his Mildred and her sister, Benny brought a girl he had befriended at church... and then there were the Stowaways.  I named them this, but they were actually two boys named Lennox and Moses.  They hopped onto the back of our tuk-tuk as we drove off and then hung around, hoping for a free lunch.  A couple in our group gave in and treated them to a nice meal, but those sneaky boys did receive a lecture!  Larry told me they do this every week.  It's not as if they don't have food provided for them at church, but they like to aim for something even nicer.

Lunch with Lavin was so special.  Naana sat at our table with us, so there were three generations of one diverse family gathering to fellowship and enjoy the limited time we have together.  I was able to talk with Lavin a little more about her family.  She says her mother took her out of school for two months last year to visit her aunt in Nairobi, which is troubling to me.  No wonder she has had a hard time in school this last term!  She's two months behind in all of her classes.

Lavin says her mother, Ruth, works every single day at a small shop that sells all sorts of things, like wooden spoons.  Lavin's father is dead, but her mother has re-married.  Lavin would not talk about her step-father, which makes me concerned about that part of her life as well.  Lavin says she would like to be a doctor and I told her that I would help her, but she must do better in her classes or they will not even let her into high school.

Audie took all of our girls back to Ringroad while the rest of us returned to St. Anna's.  I began to journal, closed my eyes for a moment, and woke up two hours later.  I guess I'm not as caught up on my sleep as I thought!

Also, I'm not feeling well tonight.  We went for dinner at a chicken grill, but I decided to skip out on eating for the rest of the day until I feel a little bit better.  I seem to have a stomach bug, but I am praying for healing by morning.  My God is a mighty Healer.  He will bring me restoration from this illness so I can continue serving His children here.  I trust His promises and His purpose for bringing me back to Kenya.  Sickness has no place on this trip!  The Lord has taken victory over all disease and all exhaustion and all fear.

I'm relying on Jesus tonight.  He is all I need and more.  He has done so much for me that I cannot tell it all.

Four years ago: Playing Hokey Pokey... in Africa.
Two years ago: Where's Waldo? And Lucky Wasn't So Lucky After All.
One year ago: Shrunken Heads and Tattoos
Posted by Emily at 12:00 AM