The Hungry, The Thirsty

The other day, I was looking at a website that hosted all sorts of "dumb laws," such as how it is illegal to go whaling while in Oklahoma and how you cannot lasso a fish while in Tennessee.  Some of these laws were indeed quite dumb, but I came across one law that I did not find dumb at all.  In fact, I think it should be enforced nationwide, instead of in one state.  Here is the law.

In the state of Arizona, it is unlawful to refuse a person a glass of water.

And here is the listed reason for this law:

In the summer-time, with temperatures reaching a topping 120 degrees, often people will need water, but may not have the money to pay for it (mainly applies to homeless). Hence, the law. It is very much in effect today, with businesses being reported (and heavily fined) who refuse to supply water to those who ask for it. Convenience stores are the primary businesses who uphold this law. -Dumb Laws

Today I read that there are more than 3.5 million homeless people in the United States today.  With the economy being like it has been, it is becoming more and more difficult for America's poor to sustain themselves through this difficult time.  Did you know that homelessness rates have not decreased since 2007?  How is that for the American dream?  These people are living on the streets, when there is the wealthy all around them, either openly refusing to do anything to help or not even realizing what is right under their noses.


I was volunteering at a local soup kitchen a few weeks ago when one of the staff members spoke about how the average age of a homeless person in my city is nine years old.  This past school year, I have been teaching a weekly Bible study for homeless children living in a shelter, and the fact that the average age of homelessness in my town is that young still blew my mind away.  My little brother is ten years old, and I can't imagine him having already been living on the streets for a year.

And you know, even the people who do fritter their money away on worthless things deserve to be able to eat.  They deserve a glass of water when they're thirsty, don't they?  This reminds me of Matthew 25 in the Bible, where Jesus talks about the sheep and the goats.

Then the King will say to those on His right, "Come, you who are blessed by My Father; take your inheritance the kingdom prepared for you since the creation of the world.  For I was hungry and you gave Me something to eat, I was thirsty and you gave Me something to drink, I was a stranger and you invited Me in, I needed clothes and you clothed Me, I was sick and you looked after Me, I was in prison and you came to visit Me."

The King will reply, "I tell you the truth, whatever you did for the least of these brothers of Mine, you did for Me."

They also will answer, "Lord, when did we see You hungry or thirsty or a stranger or needing clothes or sick or in prison, and did not help You?"

Then they will go away to eternal punishment, but the righteous to eternal life. 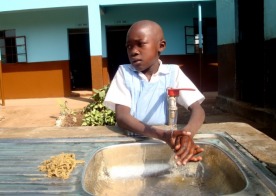 There are so many people around the world who are hungry, who are thirsty, who have nothing to their names, and when we do not serve them, Jesus counts that against us.

Jesus does not specify, "Well, you fed the little children but ignored the lazy homeless men, so that's okay... so long as you fed the innocent ones."  No, He said to help the least of these, which is the poor.  All of the poor.  And that includes the smelly, bearded men who live on the street corner with a cigarette in their hands and a bottle of booze at their feet.  If they are hungry, it is still our job as Christians to feed them.
The next time you see someone who is hungry, no matter what they look like, no matter what they smell like, no matter how lazy or 'sinful' they are, why don't you buy them a burger from McDonalds?  Why don't you give them a water bottle so they can have something to drink?

There are so many hungry, so many thirsty, so many needy people wherever you look, and this poverty epidemic will not end unless people like you and I work to stop it.
Posted by Emily at 7:23 PM