The stairs that lead to nowhere. 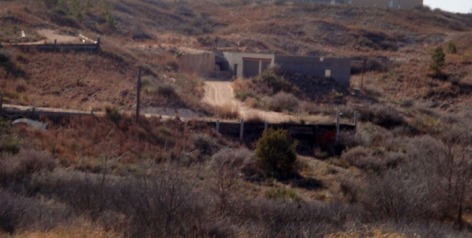 For my seventeenth birthday, I did not have a big celebration.  Instead, I invited a few girl friends over to spend the night.  Towards the beginning of the party, before everyone showed up, a couple of friends and I decided to go out and explore the old abandoned house that rests on top of a steep hill about a quarter mile away from my own house. 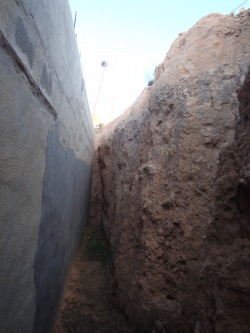 The house has existed exactly the way it is now since before I moved into my home six years ago.  It is only half-finished, but it is filled with all sorts of interesting objects: faded paintings, shower hooks, working toilets, formerly nice chairs, and an expensive Kubota tractor.  All of these things are inside of a house that has no roof, and only partially-finished walls.

My friends, Lauryn and Brently and I, found a gap about a foot and a half wide between the building and the cliff face.  It leads around the entire house, and we spent a while exploring behind the building, looking around and wondering why on earth anyone would build a nice, two story home facing a breathtaking sunset each night, and then never bother to finish the structure.
We soon came across something about five or six yards away from the house that brought us to a sudden stop.  We were stunned into silence as we stared upon the oddity that rested before us.  It blew away everything about the house that we thought was a mystery before. 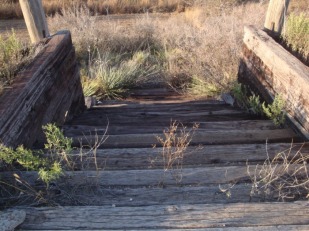 There was an aging, wooden staircase that led to nowhere.  Literally, nowhere.

It is not uncommon for people out where I live to have ranch-style staircases outdoors that help them better move around their property, but the stairs always end up leading somewhere.  This set of stairs led about half way down the hill, and then stopped abruptly.  It wasn't like they were half built.  They looked finished.  It was baffling.

Yuccas and weeds blanketed the earth right below the bottom stair step, not that you would want to go down any further, as the ground was far too steep. 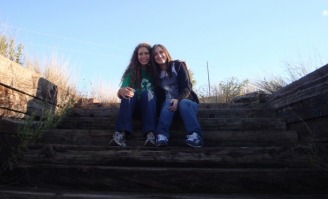 Even after my party ended, the lonely staircase continued to linger in the back of my mind.  This may sound strange, but the stairs remind me of something that Jesus talks about in the Bible.  No, He doesn't say anything about a staircase that leads to nowhere, but He does mention something that reminds me of this place in Mark 4:1-20, the Parable of the Sower.

Mark 4:18-19
Still others, like seed sown among thorns, hear the Word; but the worries of this life, the deceitfulness of wealth and the desires for other things come in and choke the Word, making it unfruitful.
I am only creating a possible scenario here, but maybe the original builders of this property started this house with exciting dreams of a life in the country.  Maybe they wanted a home overlooking the sunset.  Maybe they wanted to be able to see the stars every night, and smell the grass when they walked out their front door.

But then, maybe their dreams began to fade when the harsh reality of life set in.  Finances, job loss, other shiny things that begged for them to purchase instead.  Maybe they found a fancy condo in New York and decided that city life would be better suited for their lifestyles.

Whatever happened, this family must have begun the home with excitement, and then the excitement somehow faded away, until the home was nothing but an aging, unfinished structure, something that will sit on the face of a cliff until it crumbles away into nothing.  The stairs, the house, all of it has become worthless, unfruitful.

Sometimes our walk with Christ may become just like the staircase.  We start out excited, following His every command with pure joy.  We build our relationship with God a little more each day and we're happy about it.  But then other things come along- finances, a hectic life, a tragedy- and Christianity doesn't seem to suit our life the way we want it to... it seems much easier to focus on something else.  We don't have enough time for Him.  We find ourselves taking a break from a lifestyle that used to be lived out with eagerness and excitement.  We keep moving farther away until our relationship with Him is nothing but a crumbling structure on the face of a hill, fading a little bit more each day.

I encourage you, don't let your relationship with Christ become like these stairs.  Don't let it be unfruitful.  Don't let it lead to nothing in the end.  Even when the excitement wears away, stay strong.  Continue the plan God has for you.  Don't let your life end up completely pointless, like useless stairs that will never help anyone.
Posted by Emily at 7:09 PM