It's crazy to imagine that the "Facing Prejudice" social experiment I did with Ali was almost a year ago now.  One social experiment we were planning to do last Christmas Break was for me to dress up like I was a pregnant teen and see how I was treated.  Although I was already eighteen at the time, I have always looked younger than I am.  I'm only an inch over five feet tall and I am often mistaken to be fourteen, fifteen, sixteen years old.

It took so many attempts to try to find the right pregnant belly.  We didn't have any sort of pregnant suit, so we kept trying to find various pillows and things to stick under my shirt.  The problem is, everything was either much, much too big or much, much too lumpy or lopsided.  Nothing seemed to look like a pregnant belly.

Most of the time, I looked more like the Octomom than a pregnant teen. 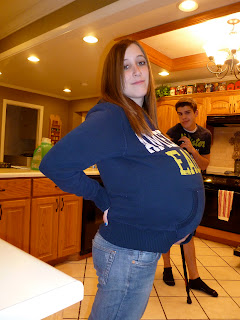 Another problem is that the pillows were making my tummy look fluffy and squishy, not pregnant.  My dad is a doctor, so we were sure he would have some advice for us, but for some reason, he wasn't thrilled about the whole idea of me walking around in public looking pregnant.  I wonder why.  :)  Rebekah's mom, however, did enjoy helping us find various pillows and sweaters to stuff under my shirt.  The bigger the item that could fit, the funnier the night became.

As the hours passed, our attempts began to work less and less, but we were able to brainstorm about what the social experiment could be like.  We decided I would wear a thick sweater of some sort to try to hide the fact that my pregnant belly was fake (if we could ever find a reasonable pregnant belly).  I would wear very little makeup (or Ali's idea was for me to wear heavy makeup, since a lot of young girls unknowingly put on too much when they first start wearing makeup).  I considered wearing pigtails but then rejected the idea, as that seems to be the default "I look younger than I am" disguise.  Wearing a brand directed towards a younger audience like Limited Too, Justice, or even Aeropostale also might quietly suggest that I was a young teen.

Finally, someone brought me a bag of cotton balls and wrapped it around my waist with an ace bandage.  Somehow, this worked perfectly.  I looked like I was about seven months (but recognizably) pregnant.  And as far as I can tell, my stomach didn't look squishy, especially because of the tightness of the ace bandage. 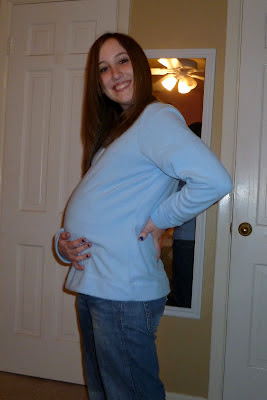 For the finished product, I would wear a couple more layers or spanx of some sort to make sure and hide all of the creases from the ace bandage.  Otherwise, I was good to go.

The picture above totally cracks me up.  It's so weird to see myself looking pregnant.  I'll admit that I still haven't posted the thing to Facebook... I'm a little afraid of all the responses I would get since it looks so real!

We never ended up carrying through with this particular social experiment.

One reason was that I was concerned that someone would recognize me and I would have to explain away the fact that I wasn't actually pregnant but rather pretending to be pregnant... and what if someone recognized me and didn't say anything and then a rumor got out that I would have to awkwardly explain away?  It's not that I was scared everyone would think I was pregnant, because I would be able to show the evidence against it quite easily.  But see, in the wrong context, pretending to be pregnant can seem pretty... bad.  And very weird.

No, we almost felt the need to go out of town to perform the social experiment without stress, and we never found the time to leave town.

Another issue was the fact that I was eighteen, and although I look young for my age, I'm not sure if I look young enough for this experiment.  My fifteen-year-old sister could be a possibility, but we never sat down and discussed it long enough.

Perhaps over Christmas break we'll go ahead and carry through with this social experiment.  Who knows?

Man, every time I see that picture, I start to laugh.
Posted by Emily at 3:40 AM