Elizabeth: One Who Waited

As Christmas Day approaches, I have been studying in the Bible about women whose stories are told around the time of the birth of Christ.  They lived in faith and courage, and there is much to learn from them.  A couple of weeks ago, I talked about Mary, a woman of faith.  Today I will share the story of Elizabeth, Mary's relative and the mother of John the Baptist, a woman who waited in hope.  You can find her story in Luke 1. 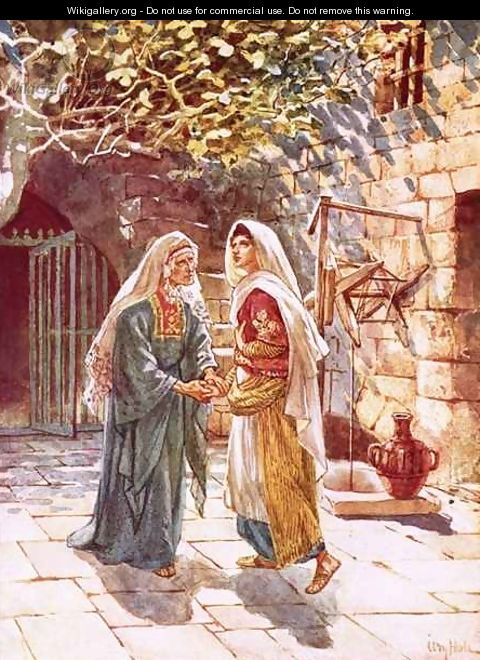 Elizabeth is first mentioned in Luke 1:5-7.  She was married to a priest named Zechariah.  Elizabeth was also in the lineage of the priests as a descendent of Aaron.  The Bible describes her as "righteous in the sight of God, observing all the Lord's commands and decrees blamelessly."  Elizabeth was also quite old.

There was tragedy in Elizabeth's life.  She was barren.  She lived in a time where a woman's value was often defined by her ability to bear children, particularly sons.  Barrenness was considered a punishment from God.  As a woman who loved the Lord and served Him wholeheartedly, Elizabeth must have struggled with the fact that she had been given no children.  By the time she reached an old age, she must have long since given up on ever having a child of her own.

One day, Zechariah was on duty burning incense in the temple.  As he stood before the altar, an angel appeared before him and said that his wife would bear a son that would be filled with the Holy Spirit before he was even born and who would make ready the people of Israel for the Messiah.  Stunned, Zechariah questioned the angel and doubted God's word.  He was reprimanded and unable to speak again until months later, when he named his son John.

Zechariah was made to be silent until the promise of the Lord was fulfilled.  Elizabeth became silent by choice.

After her husband returned from his service as a priest, Elizabeth discovered she was pregnant and went into seclusion for five months, spending all of her time in prayer before the Lord.  How filled with hope she must have been!  "The Lord has done this for me.  In these days, He has shown His favor and taken away my disgrace among the people" (Luke 1:25).

Six months into Elizabeth's pregnancy, her cousin Mary was visited by Gabriel and given news about her own pregnancy.  Mary was greatly encouraged by the testimony of her older relative.  Gabriel shared Elizabeth's story with Mary when she was troubled, and she immediately rushed to Elizabeth's town in Judea, a journey that was probably the length of a couple of weeks.

The reunion of the two cousins was filled with great joy.  The child in Elizabeth's womb already had the Holy Spirit, but as soon as Mary entered the room, Elizabeth was also filled with the Spirit.  When she spoke in a loud voice, she prophesied, saying, "Blessed are you among women, and blessed is the child you will bear!  But why am I so favored, that the mother of my Lord should come to me?  As soon as the sound of your greeting reached my ears, the baby in my womb leaped for joy.  Blessed is she who has believed that the Lord would fulfill His promises to her!" (Luke 1:42-44).

Mary had been pregnant for very little time at all, a few weeks at the most.  She almost certainly had not yet begun to show.  Though she waited, not even she may have yet noticed a change in her body.  The immediate reaction from Elizabeth, brought forth by the Holy Spirit, was a confirmation of the Lord's promises to her.

"But why am I so favored, that the mother of my Lord should come to me?" Elizabeth said joyfully.  She was one of the very first to wholeheartedly place her faith in Jesus Christ, before He even emerged from His mother's womb.  Without hesitation, she called Jesus her Lord.  She recognized Him as the Son of God.

There were many years between the two women.  Elizabeth was elderly; Mary was a youth.  However, both were bonded together through the promises of God, a Messiah to come, and hearts overflowing with thankfulness for the Lord.

Mary stayed with Elizabeth for three months before returning home to Nazareth around the time her cousin gave birth.  Elizabeth had a son, just as she had been promised.  Everyone she knew heard about the Lord's great mercy, and the Bible says that they shared in her joy.

Just like that, all of the insecurities and disgrace Elizabeth had felt for the entirety of her adult life faded away.  She was loved.  She was favored.  She was an instrument of the Lord, and she clearly felt His compassion for her.

There are times in my life when I feel like I'm stuck, unable to see God's plan for me in a difficult situation.  I've never experienced the cultural disgrace that Elizabeth felt, but I have faced discouragement and loneliness.

Elizabeth had a gentle faith in God that did not falter.  She served Him, even when she felt as if her dreams were sifting through her fingers like sand.  When promised a son under impossible circumstances, she waited.  She worshiped.  And she was given the honor of being one of the very first to believe in Jesus Christ as her Savior.

If you are in a place of waiting in your life, do not be discouraged.  The Lord's promises are true.  "Blessed is she who has believed that the Lord would fulfill His promises to her."  He is faithful to you.  He loves you.  He brings hope.

Wait in His arms and shout with joy about the good news He has brought to earth.

Two years ago: I'm excited.
Four years ago: Christmas poems
Posted by Emily at 12:00 AM