Over the next few weeks of December, I would like to talk about some of the women who had a part in the Christmas story.  This season is about Jesus, as should be every day of the year, but as we take the time to worship Him and celebrate His birth, I would also like to look into a little more what it would have been like to be a woman used by God in this precious story of Christ.

I think it's easiest to imagine Mary, as she is the woman who is remembered most often during this season, and for good reason.  She was the mother of Jesus.

No one knows Mary's exact age, but in an era when child brides were the norm, she was most likely in her early teens.  Mary likely still lived with her mother and father, but she was betrothed to a man named Joseph, which in their Jewish culture meant Mary had already entered the first step of a binding marriage.  In order for her to break her engagement, she and Joseph would have had to file for divorce.

Even today, when a girl is engaged and turns out to be pregnant before marriage, there are sideways looks and whispers.  Imagine if a girl you knew from college became pregnant with a child that was not even her fiance's.  Surely judgment and gossip from everyone she knew would rain down over her head like a thunderstorm.  She would face so much condemnation.

In Mary's time, a Jewish woman who became pregnant outside of marriage would instantly receive a death sentence.  Mary was bound by the first covenant of the Old Testament.  Both her parents and Joseph carefully followed the Jewish law.  Deuteronomy 22:22 and Leviticus 20:10 set forth the punishment for adultery, and that was death.  Mary was considered married, and remaining a virgin was necessary in order for her to keep her life and her future secure.

A thought that has left me awed in recent months has been Mary's bravery when she was approached by the angel Gabriel.  I have been reading through Ezekiel and Daniel this semester.  Scrawled along the margins of a few pages of my Bible, I have written things like: "This is how people react to an angel."  The immediate reactions tend to be terror, falling over, and trembling violently.

Daniel 8:15-17 says, "While I, Daniel, was watching the vision and trying to understand it, there before me stood one who looked like a man.  And I heard a man's voice from the Ulai calling, 'Gabriel, tell this man the meaning of the vision.'  As he came near the place where I was standing, I was terrified and fell prostrate."

A little later, in Daniel 10, Daniel cannot even speak without assistance, he is so awed by his visions of heaven.  "'How can I, your servant, talk with you, my lord?  My strength is gone and I can hardly breathe.'  Again the one who looked like a man touched me and gave me strength.  'Do not be afraid, you who are highly esteemed,' he said.  'Peace!  Be strong now; be strong.'"

Mary may have been terrified at the sight of Gabriel as he appeared before her and said, "Greetings, you who are highly favored!  The Lord is with you," even if she did not fall over in fear and in trembling.  In fact, Luke 1:29 did say she was greatly troubled by his words.  The Greek word for this is διεταράχθη (dietarachthē), which can also mean perplexed or pondering.  My ESV Bible says that she tried to discern what kind of greeting it might be.  Mary was concerned by the visit, but instead of reacting out of terror, she pondered to herself what the angel could possibly mean by appearing before her this way.

Gabriel responded, "Do not be afraid, Mary; you have found favor with God.  You will conceive and give birth to a son, and you are to call him Jesus.  He will be great and will be called the Son of the Most High."

The Jewish people had been waiting for a Messiah for so many years.  They expected a man to appear on a throne and with great power and force to rescue them from the Romans, but instead Gabriel spoke to a child, to a virgin girl, and told her that she would give birth to the one for whom all of her ancestors had been eagerly waiting.

Mary asked, "How will this be?", which was nearly the same question as her cousin-in-law, Zechariah, had asked Gabriel before being reprimanded for his lack of faith.  Mary asked a very similar question, but she asked it with pure motives.  Her heart was not one of fear and doubt.  God is our loving Father; He answers our questions in the way that we need, and beyond that, we are called to have faith that our Blessed Controller (1 Timothy 6:15) will keep us safe in His will.

Even in her curiosity, Mary had the faith of a child.  While Zechariah doubted that God could perform a miracle in his life, Mary merely wondered how the Lord would use a girl like her.  Gabriel realized this and so he did not reprimand her for her curiosity.  Instead, he answered her question: "The Holy Spirit will come on you, and the power of the Most High will overshadow you."  This was enough for Mary.  She believed.

Gabriel's words certainly would have terrified me!  The Most High would overshadow her and impregnate her?  What an overwhelming thought.  Mary's calm and graceful response leaves me amazed.

"Behold, I am a servant of the Lord; let it be to me according to your word." 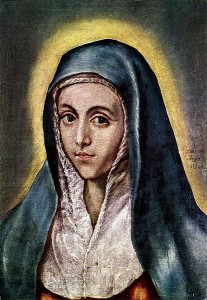 These words are so very powerful.  As Mary spoke, she surely realized the consequences that were to follow.  All her life, she had been warned about the punishments for breaking the law.  She likely had seen punishments with her own eyes, women stoned for sleeping with other men.  Now here Mary would be impregnated by the Holy Spirit as a young virgin girl, already betrothed to a man.  Who could possibly believe that her pregnancy, out of wedlock, was of the Lord?  Why would Joseph not abandon her?  Why would her parents not drag her into the streets to be put to death?  Mary's reputation as a godly woman would not be the only thing lost; her very life was in danger.

Yet Mary's faith did not waver.  She humbly took her place as a servant of the Lord.  The whispers of fear and doubt crumbled from her shoulders.  "Let it be to me according to your word."  And so it was.

She would take it all for the sake of her Lord, her Creator, her true Husband.  Her life was His.

God will never approach me to birth His Son, but He may approach me with a calling that is frightening and difficult to accept, and when He does, I hope that I have the same response to Him as Mary did: "I am a servant of the Lord; let it be to me according to your word."

God asked for Mary's life with no exceptions.  She was willing to be ruined for the Lord, if that is what He asked from her.  Her faith brought so much favor.

If the time comes and the Lord asks me to allow my life to be ruined, will I say yes?

Let it be to me according to Your word.

Two years ago: The Embarrassing Picture
Four years ago: Legacy
Posted by Emily at 12:00 AM