We stood at the mouth of the cave and peered into the unknown. Darkness stretched far beyond the weak lights of our candles. In February, I went on a lantern-lit tour through the Left-Hand Tunnel of the Carlsbad Caverns in New Mexico.

Light flickered against the walls as the ranger lifted his lantern and motioned for us to look closer. "Notice there is no wind in these tunnels. Just like the face of the moon still has the footprints of the very first astronauts, anything that you change in these caverns will stay the same for thousands of years to come." 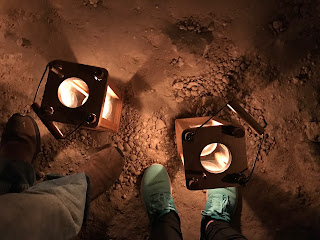 Obvious marks pocked the walls. They had been made by the very first explorers of this tunnel. These early visitors of the cave didn't value preservation in the same way that we do now, so they hacked away at the walls with pick-axes. Certain parts of the walls were completely broken, changing so much of the cave that researchers can no longer study how the tunnel was formed.

A hundred years ago, someone made marks on the face of a cave wall. And a hundred years later, they are still there. White gashes against stone, forever changing the tunnel, forever marring its walls. The ranger's lesson was that we should be careful about the impact we make on nature, as the changes we make might stay there forever.

So many times in my life I have felt like that cave wall, like I have been forever marked - forever scarred by the impact of my own sin.

When I have chosen to put things before the Lord - a gash here. When I have insulted myself, not loved myself, put down one who was made in the image of God - a scar there. Every hurt, every wrong word, every broken mistake; they have all left irreparable lines on the fabric of my heart. And when He sees me, does He see that? Does He see what could have been and is no longer? Does He see what was broken, what will no longer be the same?

Isaiah 64:6 says that all our righteous acts are like filthy rags! In the face of my own sin, my best works are no better than what is torn and undesirable. I have sat and felt the scars brought by my sin like pock-marks on a cave wall, and wondered... how can I still be lovable? How can I ever be what I was or who I'd like to be? 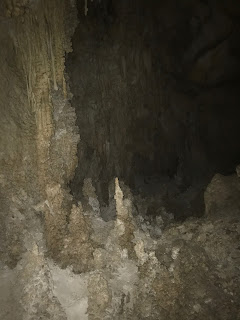 Each time I have felt undesirable, unforgivable, unredeemed, I have believed a lie. The truth is that when my Father sees me, He does not see the marks of my sin. He does not see what is broken. He sees one who is redeemed. 2 Corinthians 5:17 says, "if anyone is in Christ, the new creation has come: The old has gone, the new is here!" I am not what was broken. I am what is new. I am loved and lovable, new and still changing. Sin does not define me any longer and I am not a slave to who I was before.

1 Corinthians 1:30 says that Christ made us right with God. Through faith in Him, we are seen as righteous in the sight of our Creator. Christ bore my iniquities so that I could be healed (Isaiah 53:11, 1 Peter 2:24). There is no condemnation now when I go before the Father (Romans 8:1). Instead, there is an abundance of grace. I am an heir. I am a child of God.

The power of the cross is so much greater than what I have done. Christ has the power to substitute what was old for what is new, for what was unloved with what is cherished. My old self was crucified with him (Romans 6:6) and the marks are gone now. I'm seen as pure and whole and beloved before Christ and this brings so much joy! 2 Corinthians 5:21 says, "God made him who had no sin to be sin for us, so that in him we might become the righteousness of God."

Isaiah 61:10
I am overwhelmed with joy in the Lord my God!
For he has dressed me with the clothing of salvation
and draped me in a robe of righteouness.
I am like a bridegroom dressed for his wedding
or a bride with her jewels.
Posted by Emily at 5:14 PM