Every month this year, I am writing a letter to my sponsored daughter, Lavin, through Christian Relief Fund.  This month will work a little differently.

Yes, I will write Lavin a letter, but I will not be sending it in the mail.  In four days, I will be on my way to Kenya, Africa, where I will be able to give my letter to Lavin in person.  So today, instead of sharing the contents of my letter and giving ideas of what to write and little things to send, I'm going to show you what I'm bringing my family's sponsored children, just because I am so very excited.

As I'm sure you know by now, I sponsor Lavin, my sweet daughter who is sixteen (can you believe it?!).  She was twelve when I met her for the first time and we have kept in touch regularly since then.

My parents also sponsor two kids named Faith and David.  My dear friend Barbie and I were given the gift of naming David when we visited him in the Bush outside of Eldoret, Kenya in 2009.  His mother had ten kids, was exhausted and hungry, and had not yet named her infant son.  We named him David, because David from the Bible was also the youngest of many brothers and he turned out to be a mighty king and a man after God's own heart.

Needless to say, I am so very excited to see David again.  He was only a few months old the last time I saw him and now he is about four.

My family also sponsors another little girl from Eldoret, Kenya.  Her name is Faith.  We began sponsoring her not too long ago, so I have not met her yet, which is why the only picture I can show you is the slightly dark one we have up on our fridge.  I am thrilled to love on this beautiful ten-year-old. 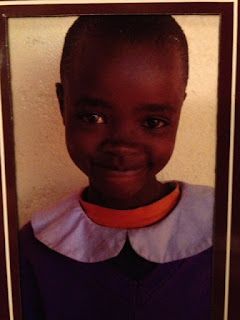 I don't have much room to bring gifts, but I couldn't help but get a few small things to bring to each of our kids.  It is a special thing to meet one's adopted parent, and I loved giving Lavin a gift when I first met her so many years ago.

A couple of weeks ago, my mom and I went to Target to look around and find some appropriate gifts for our three kids.  This is what we came up with.

For David, we picked out a little outfit.  A nice plaid shirt with sleeves that can roll up or be long (it is cooler in Eldoret than you might expect).  A pair of denim shorts with a little belt.  I also added a small paperback book I got as a kid's meal prize at Chickfila.  It's short and sweet and will most likely be David's very first book of his own. 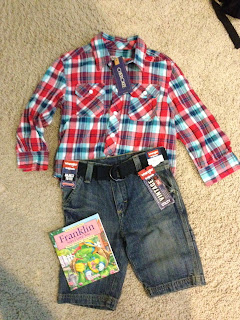 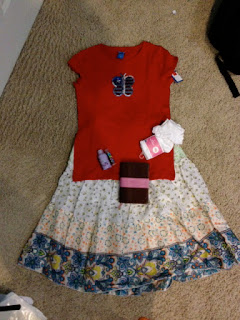 For Faith, we picked out a red shirt with the American flag in the shape of a butterfly on the front.  The Kenyans I've met love America, especially now that Obama is president (because he is half-Kenyan) and so anything red, white, and blue is a big hit.  We also got Faith a little skirt and a pair of frilly socks.

These socks have a story.  It's kind of funny, because the youngest in my family, Luke, is already several inches taller than I am, so my mom and I had no idea what size of socks to get a ten-year-old girl.  We actually had to stop a mother who was toting around some young kids to ask her for help.  She said, "Well, how tall is the girl?"  There was an awkward pause and I said, "Um... she actually lives in Africa."  The mom was so kind, so she smiled and said, "I think those will be perfect."

I also am passing down a pink pocket Bible to Faith that I used to have.  It isn't very worn and since she is old enough to read, I want to make sure she has a Bible of her own.  I'll also slip in a couple of sweet-smelling lotions and soaps for her to enjoy. 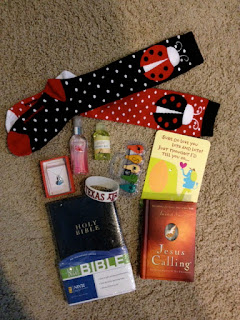 For Lavin, I got a few small things.  It was my friend Barbie's idea to get a copy of Jesus Calling by Sarah Young for Lavin and tell her that we can study the same devotional every morning.  How special!  I gave Lavin a pocket Bible in a simple translation in 2009; now I'll give her a slightly bigger Bible in the NIV translation.  I'm giving her a Texas A&M bracelet, a card, some magnetic bookmarks, and a few sweet-smelling lotions and body sprays.

Also, while I'm in Kenya, I will be bringing some money to buy Lavin an extra set of textbooks to bring home from class each day so she can improve her grades.

I'm most excited for a little necklace that I had to look for long and hard before I actually found.  It says "Daughter" and I'm so excited to give it to Lavin, because she will always be my daughter, no matter how many miles separate us. 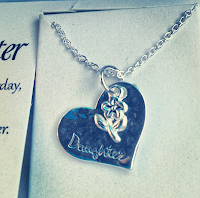 I am growing more and more excited with each passing day.  I can't wait to give each of my sweet kids their gifts, but most importantly, I am so eager to embrace each of them and say, "Jesus loves you so much, and so do I."

Two years ago: A Broken Camera
Posted by Emily at 12:00 AM