On September 27, 2016, my beloved Uncle Greg was found dead in his home. He was in his early fifties and his death came as a big shock to everyone.

Grief without closure comes with a deep ache. The loss of Greg is felt everywhere I look. On Sunday lunches containing one less person, in my now very unfilled voicemail inbox, and in an empty chair at Christmas time.

During the funeral planning stage after Greg's death, my family had to come up with a place to donate in his memory. We decided to drill a water well in his name through Christian Relief Fund. Right now, the drought in the Horn of Africa is worse than it has been since World War II. People are starving to death because of the lack of crops. People are so thirsty.

Losing my uncle Greg was so hard, but his memory is something that will always be with me. And now Uncle Greg has left a legacy in Kenya at the Maeni Girls' Secondary School. Regardless of drought or famine, these students will draw clean water every day from the well drilled in my uncle's memory. 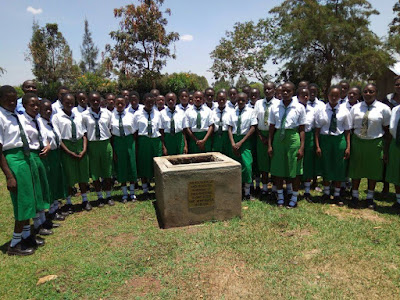 I wish I could see Uncle Greg's reaction to knowing that there is a water well with his name on it in Africa. I know he would be pleased. "That's neat, sweetie. I like that," he would probably say, wrapping a broad arm around my shoulders.


These students do not know my uncle, but they love him. They are thankful for him. And their lives are positively impacted by the memory of him.

If you want to drill a water well in memory of someone, go to www.christianrelieffund.org/water.

What a beautiful way to leave a legacy behind.
Posted by Emily at 4:51 PM