Brother Jed is back!

Some of you may remember the story of Brother Jed coming to my university campus last February.  If you don't remember, catch up on what I wrote:

Much to my surprise, I arrived on campus this last Wednesday afternoon to find Brother Jed and his wife, Sister Pat, drawing a massive crowd in the Academic Plaza. 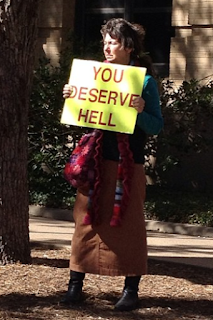 One scowling woman from their group was holding a sign that said, "YOU DESERVE HELL."  Brother Jed was apparently resting, sitting in a chair, while his wife stood and shouted at the large group of college students gathered around.  The first words I heard from her lips were, "Ladies, you do not have to be whores!"  Immediately, my eyes filled with tears.

I have met multiple girls who have made mistakes and slept with more than one partner throughout the course of their college career.  They are so often filled with shame and humiliation.  The idea that someone could so callously use the word "whore" when talking to any person on this earth is outrageous.  A girl may have walked onto campus that day, aching from the hurt of rejection and shame, and seen someone condemn her so harshly.  She may have left the scene thinking, "Wow, the Christian Church clearly will never accept me because of the mistakes that I have made."  And this is what makes me cry.

Almost immediately, I stumbled across a friend of mine named Jack.  He updated me on the subject of conversation.  Apparently, Jed and Pat had been educating our campus about sexual sins for the last hour or so... and there had so far been no mention of the Gospel or grace or love.  Only judgment.

A young man soon approached us, asking, "Do you know what's going on?"  We told him a little bit about Brother Jed, and the young man explained that he was not religious, that he had actually never even thought about where he would turn up after he died.

In a calm and clear way, Jack began to share the Gospel with this young man, who listened attentively.  The conversation lasted about ten or fifteen minutes.  After it was over, I was filled with joy.  What a great reminder that Satan may try to use men like Jed and women like Pat to turn people away from the Church and from our faith, but God is more powerful.  The Lord brings Gospel-focused conversations that are filled with love and grace and His truth.  He is faithful.  And no matter what madness happens on my college campus, His love is bigger.

I stayed in the Academic Plaza for about two hours.  Someone new soon approached me with some questions.  He was a freshman and agnostic.  He was very interested in the difference between my beliefs and Brother Jed's beliefs.  We had a great conversation.

Another young man joined us; he said he'd been raised Mormon.  He said he now was an atheist and had many resentments built up against the Christian Church.  This young man began to question me very attentively about my faith, asking specific questions.  After I answered that I was a non-denominational protestant, he shook his head.  "Did you know that the non-denominational church stopped using the Christian Bible a few years ago?  You actually believe in New Age.  That's why you believe in love and grace.  I challenge you to take the time and read some of the Bible.  When you do, you'll see that the God in that Book is completely different from the one you say you believe in."

Baffled, I said, "I'm afraid I'm going to have to disagree with you.  I've read the entire Bible, and what I saw throughout it was a just God who is loving and faithful and merciful."

The young man looked astonished.  "You've read the Bible and you still believe in God?" he asked incredulously.  "You've even read Leviticus?"

"Yes," I said.  He wanted to know why I didn't still follow the laws of the Old Testament, so I was given a wonderful opportunity to share the Gospel, explaining that we were once bound by an old covenant and living under a law that was a burden. When Jesus came to earth and died for our sins, He overcame the old covenant and broke our slavery under the law and under sin.  Now salvation doesn't come from trying to live under thousands of laws, but rather from faith in Jesus Christ.


I'm a little shy at first, and I'm often intimidated by the idea of approaching complete strangers on campus and asking to share the Gospel with them.  However, God is faithful.  He knows my weaknesses and He is bigger than each of them.  Every single Gospel conversation I had this day was initiated by an unbeliever.  What a testament to God's glory.

Another interesting rabbit trail from this conversation was the atheistic young man asking if I believed homosexuality was alright since I didn't follow the Leviticus laws anymore.  "No, I still believe homosexuality is wrong," I said, "but the Bible talks about it in the New Testament too."

The boy still wouldn't believe me.  "Prove it," he demanded, thinking apparently that I had made up those passages off the top of my head.  I was happy to show him, as I had my Bible with me.

At this point, a young girl with short dark hair and a friendly smile joined our conversation.  "I am agnostic and I believe homosexuality isn't wrong," she said, "but I have some questions for you, Emily.  Do you think the Christian Church has persecuted homosexuals and judged them?  Doesn't your Bible say that all sins are equal to God?  Why do you treat pastors who have committed adultery with more grace than someone who is gay?"  She asked these questions with complete sincerity and gentleness.  There was no anger or accusations in her voice.  She simply wanted to know what I thought.

The way that the Church treats homosexual individuals has made a big impact on my heart in the last few years, so I was eager to respond.  "You're right.  The Christian Church has definitely made mistakes in the way we have treated homosexual people.  And it breaks my heart to see Christians turn homosexuals away.  I believe homosexuality is wrong, but for me to ever offer someone living in homosexuality something other than love and grace, then I am not living like my Jesus."

This girl beamed at me and said, "Thank you for answering.  I am so appreciative that some Christians aren't as judgmental as that man over there," and she pointed to where Brother Jed had begun to loudly preach.  The girl turned to the young man who was listening with increasing agitation.  She said pointedly to him, "I think homosexuality is fine, but it's okay that Emily doesn't.  She believes in the Bible and if it says that homosexuality is wrong, it's natural for her to believe that.  That's her moral code.  And as long as she isn't being hateful or judgmental, we need to be okay with that."  It astonished me that someone who did not agree with what I believed could turn and defend me. 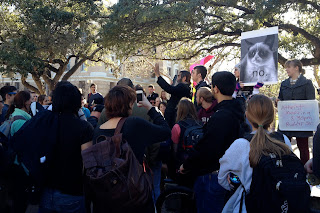 After this conversation finished, I felt overwhelmed by the mighty love of the Lord.  Completely through Him, I was able to have a civil and loving conversation, share the Gospel, and leave respectfully.  Seeds were planted.

I'm reminded of one of my favorite passages in the Bible, 1 Peter 3:15, which says, "Always be prepared to give an answer to everyone who asks you to give the reason for the hope that you have.  But do this with gentleness and respect."

I have more to say about the last two days, particularly about the issue of Brother Jed on our campus, but considering the length of this blog post already, I'll continue tomorrow and the next day, breaking this into three parts.

I would appreciate your prayers for my university.  There is clearly a spiritual war taking place on my campus.  Hearts are being won for the Lord and hearts are being turned away from Him.  I know that God has the victory, but if you could pray for the boldness and love of the followers of Christ on my campus to outshine the anger and lies, I would be so thankful.
Posted by Emily at 12:00 AM