Yesterday I shared the story of Brother Jed, a false teacher who has been spreading lies and hatred in the name of Jesus on my campus at Texas A&M University.

On Friday, my friends Lauren and Rebecca and I decided to meet on campus and quietly pray for God's love to shine through all the conflict and judgment.  We asked Him to take the victory.  Before we even began to pray, Rebecca embraced me with joy-filled eyes.  "I've been praying about this all day," she said, "and I feel like the Lord has told me something.  Texas A&M and its students are His.  Satan is trying to win, but all he has is this tiny spot on campus.  We will continue to pray for God's victory, but He has already won.  He will use this for good."

The crowd was large again when we arrived at the plaza.  We sat down at the edge of everything and began to sit in silence, waiting for the Lord to speak and give us words to pray.  I began to listen to Brother Jed again, until I had to block him out to keep from feeling sick. 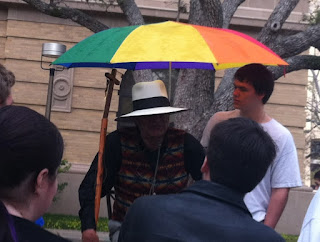 Several students surrounded the old man, shouting at him and asking him angry questions, but two Christians in particular seemed to be directing the conversation.  Brother Jed shared his "story" about how since he became a Christian in 1971, he has supposedly never sinned since.  Not once.  "You can be perfect!" he shouted.  "As a Christian, I am capable of sin, but I no longer sin... I haven't sinned for forty years!  If you sin, you are no longer a Christian!  If you fall, you will burn in hell!"

A new Christian spoke up and said, "I haven't been a Christian for long, so I haven't read the entire Bible yet, but you aren't speaking what the Bible teaches."

"If you haven't read the entire Bible, you are not a Christian," Brother Jed told her harshly.

I was disgusted by this exchange, but then I began to notice the smaller conversations that were occurring along the edges of the group.  The more I watched these conversations, the more my heart began to fill with joy.

I saw a group of four or five students holding hands and kneeling together in prayer.  I saw a group of eight or nine Christians talking in a lively but not angry way about the truth of the Gospel, not the lies of Brother Jed.  I saw someone who was not a follower of Christ approach a Christian, who said, "Let me tell you the truth..." and the unbeliever listened.  And they talked.  And they were kind to each other. 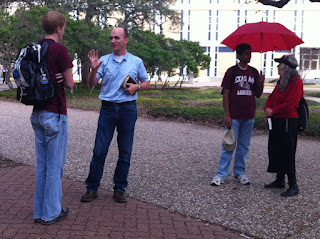 I saw Christians and atheists engage in conversations spurred by the lies of Brother Jeb.  These conversations weren't angry.  If anything, they were friendly and curious.  Bibles were opened.  Conversations were created.  Satan was attempting to make Brother Jed a source of dissension and confusion, but God had already taken the victory.  God can use all things for His glory.

Again, I feel like I'm going on for too long.  I will finish this story tomorrow (for real finish it this time)... I know this is a long story, but I am so filled with joy that I can't help but share it all!
Posted by Emily at 12:00 PM