My family left our house bright and early in the morning and boarded the plane to the DFW airport and ultimately to San Juan, Puerto Rico.

It was a long day of travel.

I woke up minutes before it was time to leave the house, so I skipped breakfast and assumed that we would eat lunch during our layover in Dallas.

Never assume anything is certain when traveling.

Sure enough, our flight arrived late and we ended up having only fifteen minutes to hurry across the airport with no time to grab something to eat and no complementary snacks available on the airplane.

The flight from Dallas to San Juan is more than four hours. I dreaded how hungry I knew I would be by the time we arrived on the island.

Nawnie, my 81-year-old grandma and travel companion, flagged down a flight attendant about an hour into the flight. "Do you have any peanuts?" she asked him. There is something about Nawnie that everyone loves. She makes friends no matter where we go, and this airplane was no exception.

The flight attendant grinned at her. "We don't serve peanuts on this plane, dear, but I can sneak you something to eat if you promise not to tell my supervisor." Nawnie promised him, and within moments, her new friend passed her a box of treats without anyone seeing. The two of us had a much-appreciated feast of soda, almonds, crackers, cheese, fig bars, mints, and chocolate cookies. It was exactly what we needed after skipping breakfast and lunch.

A little while passed and another flight attendant approached us. "Ma'am, do you have a receipt for those snacks?" she asked sternly, although there was a smile in her eye that she could not hide. Further down the aisle, our friendly helper offered Nawnie a broad wink.

A look of innocence came over my grandma's face. "Why, of course I do," she responded quickly, "I just don't know where I put it!"

Both flight attendants burst into laughter and had a long conversation with Nawnie, asking what she liked to bake, about her family, and what she was going to do in Puerto Rico. I truly don't think I have ever been to a place where Nawnie has not charmed every person she meets.

We arrived in Puerto Rico in the evening just in time to see the sun set from behind hazy clouds. I'm used to humidity in my college town, but the best word to describe the weather on this island is "steamy." Luke pretended he was drinking as he breathed in the sweltering evening air.

Our hotel, Ciqala Luxury Suites, is beautiful. We were treated to a complementary dinner of chicken and mashed potatoes, which satisfied my famished family.

The biggest surprise of the entire evening was our suite. It is as big as an apartment and features three bedrooms, two bathrooms, a living room, a washer and dryer, and even a kitchen. The suite is beautiful and has enough room for everyone. We were so excited after a tiring day to have space to stretch out and relax. 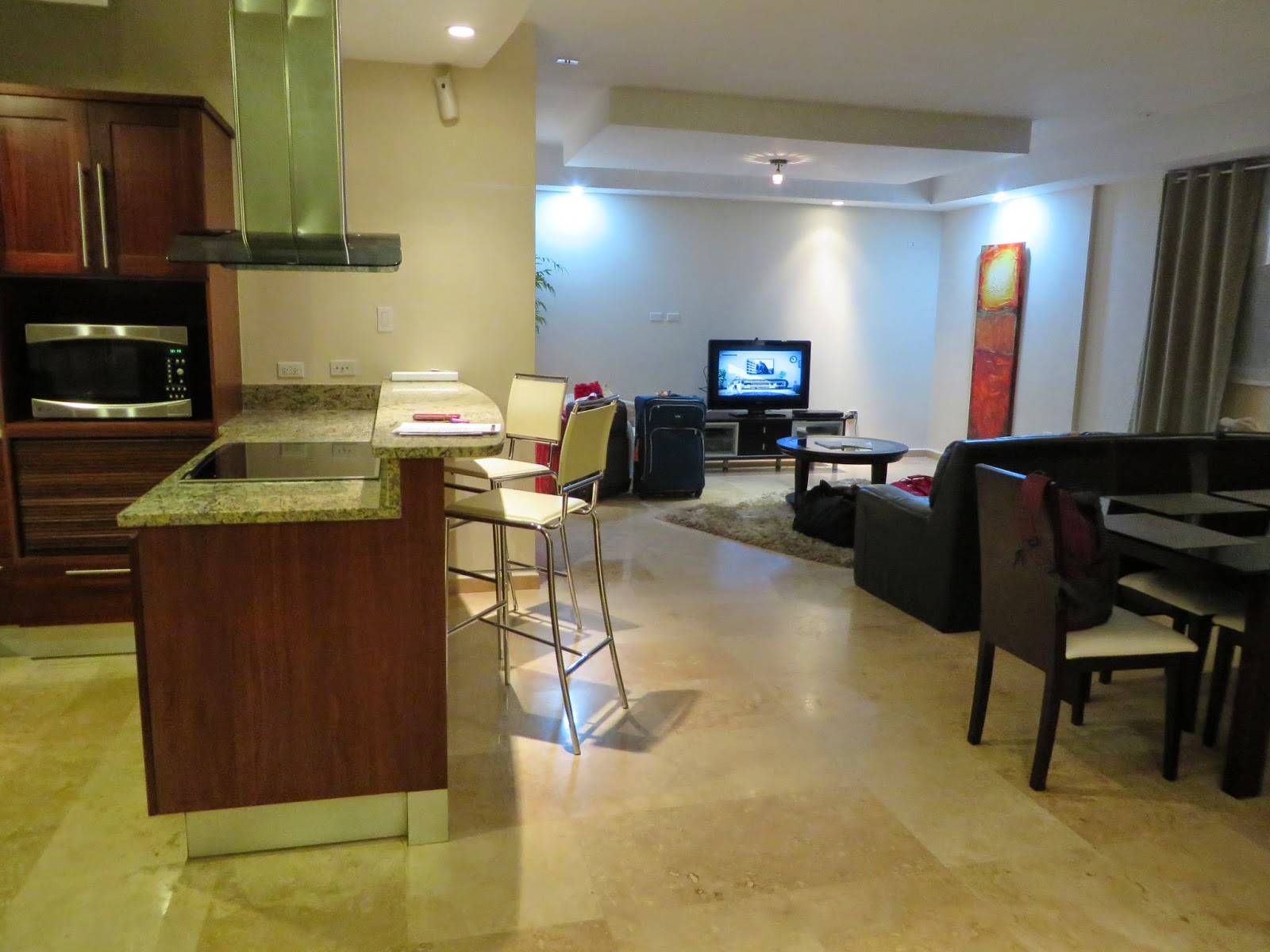 Isn't it funny how a day of sitting in airplanes is so exhausting?

Amy and I are roommates for the next two nights in pretty little black and white bedroom with a big mirror. 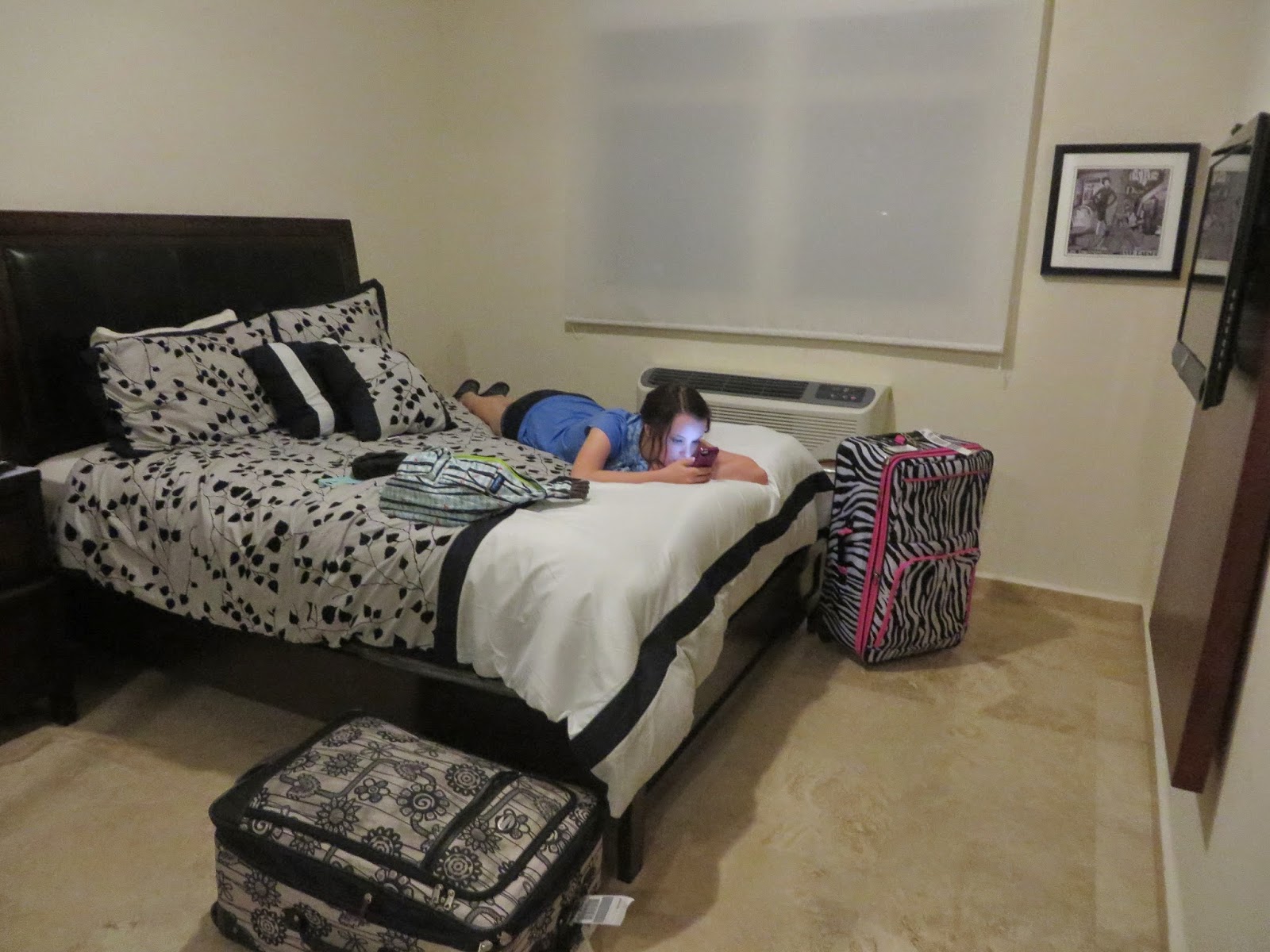 Our first day of travel may not have held much adventure or sight-seeing, but my family is retiring early with smiles on our faces and quite a bit of excitement as we approach tomorrow's hike through the rainforest.

One year ago: Letters for Lavin (June)
Three years ago: Broken Camera
Posted by Emily at 12:00 AM