One huge cultural difference between Americans and Kenyans is how we view time. A popular Kenyan saying is: “Americans have watches and Kenyans have time.” 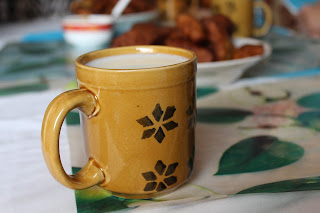 In communications terminology (remember that was my degree), America is monochronic and Kenya is polychronic. Monochronic cultures emphasize orderly and efficient schedules—promptness is priority. Time is a commodity in America. Polychronic cultures focus on relationships over timely tasks. They do multiple things at once (like answer a phone call during an important business meeting)—and being on time is less of a priority.

When in Kenya, the American’s hectic and linear view of time must fade. It kind of feels like you stepped out of a rushing river’s current into still water. Flexibility and the appreciation for relational interaction must take the forefront. If a valuable conversation makes us (or somebody else) an hour late to a meeting, this is polychronic culture—and it’s Kenyan culture.

One aspect of Kenyan culture that is both polychronic and British is the routine of taking tea.
An American can find it easy to view tea time as a distraction from the task at hand. (If you’re halfway through teaching a class and you have to pause to sit down and have tea, this is the American’s nightmare.) But when you sit back and allow the polychronic culture to guide your time in Kenya, the value of this hour spent two or three times a day becomes crystal clear.

Close relationships are formed and strengthened. You gain things from teatime conversations that you never knew before. And the rushed, hectic focus of the American on a mission can often be cooled back down to a gentle peace instead, allowing the Lord to guide your time overseas.
Posted by Emily at 4:23 PM