At 8 years old, Evans has endured more than most people ever will—and yet he is resilient and joyful and courageous. His parents were killed during the brutal war on Mt. Elgon a few years ago. Evans lived with guardians who were also impoverished by the war. They couldn’t afford to feed him. Over time, starvation sapped the strength from Evans’s little body and the color from his curls. 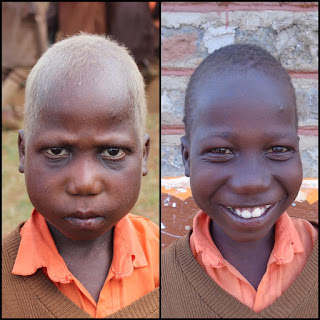 In July of 2015, Evans was struggling. His condition was evident in the dark circles under his eyes, the white of his hair, and the rough and wan pallor of his skin. When a young person’s hair has turned white, they have known suffering.

Evans spent a few weeks in the hospital under the diagnoses of scabies and malnutrition. His CRF sponsorship covered much of his bills and CRF’s general funding took care of the rest. The photo documentation of Evans over the weeks changed from him sitting weakly in a hospital bed to him riding a tricycle in the courtyard with other boys. Within two months, he was transformed.

I shared two photos above. The one on the left I took in July of 2015 when I was stopped short by how ill Evans was. The photo on the right is what a CRF worker took in March of 2016, only eight months later. What was the remedy for Evans? Food. Vitamins. And he looks like a new child.
CRF sponsorship has impacted Evans’s life dramatically. The transformation is obvious.

Let me emphasize that so many children daily have their lives changed by sponsorship, just like Evans. Their hair may not be white, but they are hungry. They also are orphans. They also have been voiceless up until this point. And with your support, you can watch as they grow into happy, healthy children like Evans is now.

Most importantly, a heart transformation also takes place when you sponsor a child. With sponsorship comes discipleship. The Gospel of Jesus is poured into a child’s life every day. The love of Jesus is shared in more than words. These children are shown action by those who sacrifice and serve to care for these orphans.

You can show the love of Jesus in action too.
Posted by Emily at 3:40 PM