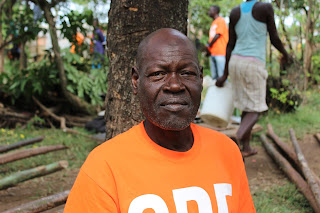 A service project our team will be doing this year is building a semi-permanent house in the Nyalenda slum. By semi-permanent, I mean an iron sheet roof and foundational logs to strengthen the walls, but clay insulation and floor. The cost of a 2-room house like this is $600.

Last July we got to take part in building a home for an elderly widower named William. In his old age, he had begun to get dementia and could not maintain the upkeep of the hut where he lived. It was falling apart all around him. 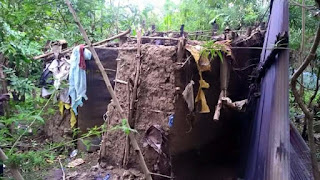 Because we obviously didn’t know how to build a semi-permanent house, our team helped to flatten the foundation of William’s new home, clearing away the trash and weeds while the construction workers began. Later, we helped them lift foundational logs and plaster mud onto the walls—the rest of the time, we got to know the community while we watched in fascination as William’s house was built by the professionals. 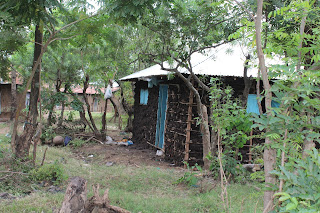 This July we will participate in the construction of another house in Nyalenda. A 16-year-old girl traveling to Kenya for the first time raised the money for this house. We don’t know yet who will live there.

There is something special about taking the time to get your hands dirty to plaster sod on a wall or remove old batteries from a dirt floor. We aren’t constructing the entire house—and so we shouldn’t—but having a small part in something transformative to a person like William is a blessing to us too.
Posted by Emily at 2:36 PM