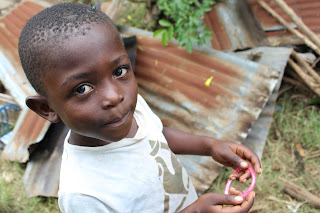 As our time in Kenya drew to an end last summer, my team had a final service project in the Nyalenda slum in Kisumu. We spent the day in an area condensed by huts and smoke from cooking fires. While we worked and walked and visited people, I think each of us was enchanted by a little boy named Darryl.

Although he was 7 years old and should have already been in first or second grade, Darryl had never been to school—and because of this, he knew no English. However, he was a friendly little guy and spent much of his morning grinning at our team from behind a nearby tree. 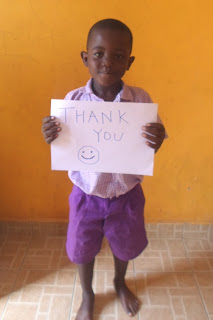 Darryl’s sweet spirit struck my heart. He has the kindest brown eyes, but he also was a caretaker of his neighbors. After I gave him a little Hot Wheels car, he smiled fleetingly and ran off, only to return with a smaller boy. Hesitant but bolder than his friend, Darryl led the fellow closer and gestured to see if I had another car to give the child. I did, thankfully.

It touched me that at seven years old, Darryl gently cared for his younger neighbor children. Even the way he interacted with them was full of kindness and brotherly leadership.

Later it was made known that Darryl is the only child of two parents about my age. Both parents are unschooled with no trade to help provide for their son. They’re in total poverty. Without hope of an education, Darryl was wandering the streets during the day. He watched many of his friends walk to school in bright uniforms without him.

Darryl now has a CRF sponsor. His mother is working hard to start a small business and make some kind of income for the little family. And in the last photo I saw of Darryl, he wore the bright colors of a schoolboy—the first one in his family.
Posted by Emily at 2:32 PM